Home » Ultimate Arm Wrestling Is Not That Ultimate 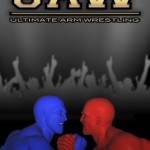 Ultimate Arm Wrestling Is Not That Ultimate 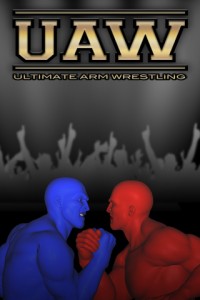 I usually start my reviews with the game itself and then move on to the soundtracks and graphics. For Ultimate Arm Wrestling, I think the best part of the game is the choice in music. The soundtrack is aggressive and in perfect tone with the type of the game. (Hint: try to tap the button according to the beat. If you manage to do it, you can't lose).

When it comes to graphics, there's not much to it. The game pitches a red bald guy versus a blue bald guy. It's obvious both have been to the gym. :) Other than that, the graphics tend to stay out of your way, presumably to make room for the game and the gameplay itself.

There's actually not much to it in Ultimate Arm Wrestling. If you read the developer's description on the AppStore, you'll see that this is more than just a monkey pushing a button. Well, actually, it's not that different. When you start the game, after the 3-2-1 countdown, look for the little round button on your side of the screen that says "Tap" and just start tapping that button like crazy. Each tap of the button will move you one step closer to victory.

The only catch of all this is that the button moves around after a few taps, so you need to keep an eye on it. The longer you take to beat your opponent, the faster the button will move around.

The loser gets punched in the face. I don't arm wrestle, so I don't know whether that's the standard :)

You get two game modes. In Survival Mode, it's you against the device. There are only ten levels to this game, and with each level passed, the button will move a bit faster. I finished the first nine levels without breaking a sweat in under 3 minutes. Level 10 is pretty difficult, and couldn't get to finish it the first two tries. If you lose in a level, you have to start over from level 1.

In Versus Mode (kind of a typo in the game "verses mode"), you can play against a friend. The mechanics are the same. Each one of you takes on side the screen and taps his or her own button until one of you loses. Be careful not to actually punch your friend in the face at the end. :)

Ultimate Arm Wrestling for the iPhone is not looking to become an olympic sport, but for waiting in line at the supermarket it's a nice time waster. There's not much replay value. The game gets repetitive after the first few levels and considering there's not much difficulty in the first 9, the game can either leave you wanting for more or with a sour taste for spending money on it.

Have it already ?
What do you think of Ultimate Arm Wrestling ?   scroll down for our comment section.