Home » How Fast Can You Shoot Using Only Ten Fingers? 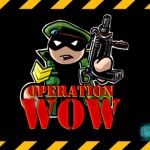 How Fast Can You Shoot Using Only Ten Fingers?

This is basically what Operation Wow for the iPhone asks of you. It's truly a unique experience, an exhilarating game, but sadly, only 6 levels. Don't get down though, those 6 missions will get the most of you yet!

Operation Wow challenges you to fight your way through the horde of enemies that are all trained to kill you on the spot. It's a game of speed, a game of hand-eye coordination and a game that will have you pulling your hair out from the very first level.

Playing Operation Wow is simple, in theory. All you need is to touch the enemy soldiers that appear on the screen, therefore killing them before they kill you. One shot won't kill you, but it drains your health, and believe me, starting with the second level, you're gonna need all the health you can get.

In addition to shooting soldiers, you'll need to take down helicopters, army boats or fortified vehicles. You can either shoot them with your gun, or throw a grenade at them if you have any. Be careful, ammunition is not infinite, you run out and if you do, you're a sitting duck. No, you can't dodge bullets! :) Your mission is also to protect the innocent, so don't shoot anyone without a gun.

The way to get more ammo is either to find an ammo case lying around and shoot it or kill animals as they appear on the screen (I know! not to friendly to animals here). Pigs, ducks, eagles, all will give you either grenades or gun ammo. A note here, you need ammo to get more ammo, so make sure you don't waste your existing ammo on playing Rambo, or you'll run out and look with tearful eyes at the pigs running by or the ammo case just sitting there for you.

Other than that, you should be good to go, boots strapped, gun loaded and iPhone in pocket. The game will throw bad guys at you and once you've killed all of them, the screen will slide to the left and more guys will come. Outlive and outgun them all and you'll be the hero.

Operation Wow basically has one game mode - the story itself with its 6 missions. You can of course choose between three difficulty levels. There are two more game modes though, but I'd like to call them bonus games.

One of them is Targets, where you get to practice your shooting ability and see how fast you've hit a target. The targets themselves are basically green bullseye targets. Avoid hitting the red ones.

The other one is Meat Ninja where you have to hit chunks of meat as they fly into the screen. Not much fun there and it lasts just a couple of seconds anyway.

Getting back to the story mode, this is where all the fun is and it'll take the best of you and your fingers and dexterity to finish this game. Good luck, soldier!

Also available for the iPad

Have it already ?
What do you think of Operation Wow ?   scroll down for our comment section.