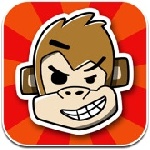 I have to admit this has got to be one of the best designed games I've seen in a while and had a chance to review. People will tell you that it might seem childish. After all, throwing poo at people literally can't be taken light-heartedly in a game. The AppStore has its own strict rules to get approved as a developer there, but I have to say it would have been a shame on their part to let us miss a great title like Monkey Poo.

Don't be afraid to throw that poo

First off, try and get past the idea of the game. You have to throw balls of your own poo at elderly people, moms and their new-born babies, girls and boys eating their ice-cream and cute animals. There's no easy way to put this, but get over it. Monkey Poo is definitely worth it.

In the game, you have to hit as many people with your balls of poo as you can. These are your primary targets, as they walk across the screen. If more than three persons get away without getting smeared, than you lose. Fellow animals are also up for getting hit themselves, but you don't lose any points if you miss any of them before they disappear into their cages. People go down after five shots and animals only require one chunk of the smelly stuff to count as a hit. Watch out for the zoo-keepers! Hit any of them and you're busted! Game over!

The game is really simple in mechanics. Everything is explained in one simple screen. Draw trajectories from the monkey to the target by sliding your finger on the screen and that's how the poo will travel across the screen. Don't hit zoo-keepers or you're out of the game. You can also tap directly on the target to get some rapid-fire shots off.

When the zoo-keepers are in your view, it's still fine to throw your monkey poo, just don't hit them. The only react if they're hit themselves.

The way I get highscores here is to never stop throwing that poo, after all, you're never out of "ammo." So keep on drawing trajectories on the screen, steer clear of the zoo-keepers, pay attention to the whistle sound they make when they're about to enter the screen, and you can't get busted.

Where does the poo stop?

Well, apparently, nowhere. It's one thing to throw your smelly monkey poo at regular people and fellow animals, but when Arnold Schwarzenegger enters the screen, you can have a blast by smearing him all over and hearing some of his most famous lines, including "I know now why you cry!" or "I'll be back!" Of course, no one says that's the Governator himself, but if it walks like a duck and talks like a duck, then it must be a duck.

After a serious spree of throwing poo he'll appear on the screen. While you can't "terminate" him, it's still fun to see how he moves as he's hit. The developers have signaled that George Lucas is also present in the game, but I've yet to spot him.

There's not much more that I can ask of the developers in this section. The artwork is simply amazing. The cartoon like characters are carefully drawn and they move extremely realistically. The backdrop, although static, is beautiful as well. You're basically presented with a colorful cartoon world that you can smear with your poo. What more can you ask?!

The sound effects are just incredible. The characters' voices are childish and extremely funny.

If you get busted by the zoo-keepers, it's game over, but the fun doesn't stop. You are able to submit your score online to either leader boards provided by both OpenFeint and Apple's GameCenter. There are over 40 achievements that are included with Monkey Poo, so sharing the poo is encouraged and desired.

I'm sure Monkey Poo will catch your attention due to its name. But do try to get over it and play it. I guarantee you won't regret any second of it!

There's more! But Moneky Poo wants your input! Go over to http://monkeypoogame.com/ and vote for your favorite celebrity and the developers will put it in the game. There's 6 celebrities to choose from, including Edturd (Edward from Twilight), Harry Pooter, Sara Poolin or Steven Poo-Bear (is that Spielberg?).

Their website also features two cool videos of the Governator and Edturd. Check them out and vote now!

Have this iPhone App already ?
What do you think of Monkey Poo ? Scroll down for our comment section and let us know!