Home » Do You Have What It Takes To Prevent A War Of The Worlds? 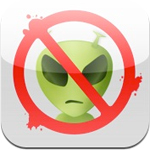 Do You Have What It Takes To Prevent A War Of The Worlds?

There's no shortage of alien movies coming out of Hollywood. You of course remember Steven Spielberg's E.T. or War of the Worlds with Tom Cruise. What sets these movies apart is the way they portray extra-terrestrial intelligence. Good vs. Bad. Invaders vs. Friendly. The AppStore has its own stack of iPhone games that deal with this controversial issue. One of the latest to come out is Kill Aliens, which, judging solely by its name, you would bet that aliens are bad, they are invading, and, well, it's up to you to stop that from happening.

Kill Aliens has just about the simplest screens I've ever seen. You don't even have a menu for the game. Once you start it up, you have to choose the difficulty level (Easy, Medium, Hard) and after that you're already in the middle of the game. That's two touches from the home-screen to the gameplay itself.

Playing the game is intuitive. Select your level, and stop the aliens from landing on the Earth's beloved green grass. The bad guys drop from the sky at various locations of your screen and at various speeds. If any one alien reaches the bottom of the screen, you're dead.

To kill aliens all you have to do is touch each alien as it falls downward. One touch anywhere on its body gives you a kill, but with more and more aliens coming down, you have to be very quick in tapping them before they reach the ground.

As you kill more and more aliens, there is one power-up that becomes available: a bomb that kills everything on screen. So when you're in trouble, touch the bomb at the bottom of the screen and all the aliens currently on the screen die.

There's not much difference between the difficulty levels either. As you can probably imagine, the Easy level gives you less aliens to kill and they come down at lower speeds. The Hard level is pretty difficult as you progress, with aliens coming down from everywhere and at pretty high speeds.

There are no extra lives to spare. You only have one chance to kill as many aliens as possible and get a high score. Now, there's nothing you can really do with that highscore. You can't show off to your friends (online or offline), because Kill Aliens has no menu, so there's no leaderboard to actually see.

This game came to me just in a nick of time. I've just watched the movie The Fourth Kind with Mila Jovovich which follows the fate of a psychologist in one town in Alaska where strange events have been happening to the locals during the past 40 years. This is a true story and the movie is filled with original video and audio footage. A true must-see.

Unfortunately, I can't say the same about Kill Aliens. The game mechanics are simple, the graphics are impressive, but there's no plot line, and no replay-value. It's a game that you're encouraged to pick up, but once you've set it down, you're not likely to play it again.

Have this iPhone App already ?
What do you think of Kill Aliens ? Scroll down for our comment section and let us know!