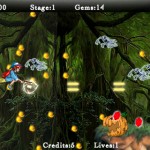 I wasn't entirely clear on what the story was all about after reading the description from the AppStore. Upon starting up the game, there is a not-so-short intro that does its best to explain the plot, but without much success either. I guess we just have to take it at face-value and play the game itself.

In Blazing Arc, you must guide Blaze as she travels back in time to discover the truth about her mother and be reunited with her. In this quest, her mother sent a flying broom stick and a spirit trapped in a magic lantern to bring Blaze back to her, hundreds of years in the past.

There's basically only one control that you need to be aware of. To move around, you need to touch the screen, which will position Blaze right underneath your finger, and swipe to move her around. Blaze cannot get hurt, as the spirit in the lantern (going by the name of Arc) has cast a spell on her, placing an invisible shield around Blaze. However, what you need to watch out for is enemy fire hitting the lantern itself, the only vulnerability Blaze has.

Firing is done automatically, so there is no need to worry about ammunition, fire rate and firing at the baddies altogether. That is all done for you.

This is not to say that Blazing Arc is a no-brainer and swiping up and down will kill you all the monsters. Your real task is to stir the girl through the maze of enemy fire, and trust me, there's a lot of that.

Destroying monsters results in large explosions that spawn gems all across the screen. Collecting them helps increase your firepower.

One of the first things you'll notice about Blazing Arc is the high level of graphical detail, both in the background artwork, the characters and the effects. These, together with the battle-style sound effects help create an exciting experience for the player.

The developer launched only the first three chapters of the game, with promises of bonuses and more exciting chapters in future updates. For now, I guess we'll need to satisfy our game finger with only a taste of what's to come. That being said, the game right now feels more like a Lite version of the full game, so that begs the question of why it has a price tag. From my point of view, I consider this as an investment, rather than a gaming delight right now. Hopefully, the developer will spawn some new creative levels for Blazing Arc - Magical Shooting Game.

Have this iPhone App already ?
What do you think of Blazing Arc - Magical Shooting Game ?   scroll down for our comment section.