Home » Defend The West Against Aliens 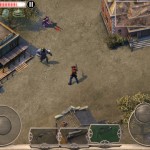 Defend The West Against Aliens

When a spaceship lands in the 1800s in the wild west, you know it means trouble. You also know it might make for a silly plot in a movie. Well, the movie was made - Cowboys & Aliens - directed by Jon Favreau, one of my favorite actors, whom you might remember from Iron Man, G-Force or Daredevil. It wasn’t log before the iOS game surfaced as well, and I’m glad to say it’s not a feeble attempt to cash in on the movie. And why do I say this? Because I haven’t seen the movie, so I’m taking the iPad game Cowboys & Aliens as the first experience with the “franchise.”

What’s the game about?

In Cowboys & Aliens the iOS game, you play Zeke, the gunslinger of the west, as you defend Silver City against the attacking alien horde. The game puts you in charge of the city’s defenses and his hero for 15 gun-fighting intensive missions.

In order to play Cowboys & Aliens, you only need opposable thumbs, both of them. The game is a dual-stick shooter. You’ll use your left thumb to control and move Zeke and your right thumb to aim and shoot. The game map is not big at all and you’ll get a feel for where every building is by the second or third mission.

One big warning when it comes to the controls. While Zeke is darn easy to maneuver, I can’t say the same about his shooting skills. Shooting is pretty difficult to master, plus it’s based on the notion of shoot first, aim later. What I mean by this is that the right control is used for both shooting and aiming, at the same time. So you would need to rotate the controller to aim, but the second you touch that controller, it will start firing. This would be no problem if you wanted to play Rambo, but when you have a limited capacity weapon, you might end up depleting your ammo before you got a chance to aim right. And then you have to wait to reload before properly taking down your enemy.

As far as I can tell, that’s the only problem with the controls in Cowboys & Aliens. And you know me, I like constructive criticism, and not just complaining. I have a solution developers might be interested in pursuing. It involves aiming first and shooting later, the natural order of things. So you’d use your controller to aim as you do now, when the aim is accurate, a simple double-tap on the controller will start firing. Lifting your finger off the controller, stops the firing and gets you back in aiming mode. Just something for the developers to consider.

Sprinkle in a few drops of strategy

The game is not all hardcore shooting. In-between missions, you get the chance to upgrade your weapons, repair damaged buildings and create posts for defenses. The important thing to note from the get go is that you need to protect the town’s most important buildings at all costs. It seems that the inhabitants are all tucked away inside them, so the only thing left for you to do is make sure that the aliens don’t destroy your church, your blacksmith, your saloon and your town hall. Keep these safe, destroy every alien on the map in every mission, and you’re golden.

Things though are not as easy as they seem. The first few missions, you have to deal with just two types of enemies: one that can fire at you and one that needs to get close enough to punch you. Keep moving, aiming and firing and you’ll be fine. These first missions, you also have just one weapon: your trusty gun. It isn’t until the third mission that you get the shotgun and later on, the blacksmith gives you the blaster (stolen from aliens). Upgrade these weapons as fast as you can, and you’ll stay alive that much longer.

The aliens themselves are not that smart. A few bugs in the game will slow them down when they’re running against a building or a fence - they’re sitting ducks. When they attack a building they’ll just fire at it and pay no attention to you unless you get too close to them. But you can shoot them one at a time from behind and they won’t know what hit them.

The nasty bastards are the ones that come on hover-bikes. They can do you some real damage, so my advice is when you see them, run after them and shoot them down. The earlier in the mission, the better. They don’t shoot backwards, so if you stay behind them, you’ll be fine.

What’s more to say? Go download Cowboys & Aliens, no matter if you’ve seen the movie or not. I guarantee enjoyment!

Have this iPad App already ?
What do you think of Cowboys & Aliens ? Scroll down for our comment section and let us know!