Home » Fire Up Your iPhone With Draco – The Fire-Breathing Dragon 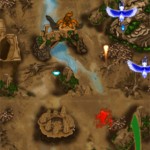 Fire Up Your iPhone With Draco – The Fire-Breathing Dragon 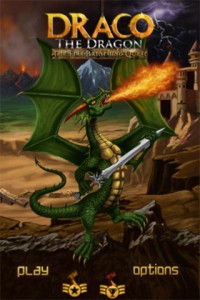 Christmas is right around the corner and most of us feel uplifted by the shopping rush around us. There’s hardly any time to relax, wind down and pick up a game to play. But for those of us that did our Christmas shopping early this year, there’s plenty of time to mock those that left it to the very end yet again by getting our hands dirty with some great games that were released in the AppStore. One of these games is Draco and it will fire up your world. Literally!

Draco is a fun arcade slide-and-shoot type of game that seems to get a lot of the ingredients right for the recipe to success. I actually like it when games have a story line, something you can follow along and that even hardcore action shooter gamers can feel like they’re involved in. Draco starts out beautifully, with a myth about how the Great Heartwood tree was the heart of the world that gave life to every living creature. An evil sorceress wanted the heart of the tree all to herself and carved it out of the Great Heartwood tree.

Enter Draco, the fire-breathing dragon that heard the cry of the tree and rushed to its rescue. It’s up to you now to guide the dragon through the hordes of minions that the evil sorceress sends and recover the heart of the world.

You’ll then rush through levels that pit you against increasingly harder-to-kill monsters as you seek out the evil sorceress. The game includes 12 different landscapes to fight through and tons of different enemies to take down.

How to play Draco

Controls in Draco are really straight-forward. To move around the battlefield, tilt your iPhone up, down, left and right. To shoot fire balls, tap continuously on the screen. Once in a while, you’ll be able to use your fire breath to blow everything in your path. And I mean, literally use your breath. To blow fire towards the enemies, blow closely to your iPhone’s microphone. This is a special attack that gets enabled with every 5 enemies that you kill.

All this sounds fairly easy and well thought out, but at times it seemed like the developers wanted to showcase the device’s capabilities, and what turned out is a game that at times tends to be awkward to control. While I can deal with sliding left and right and tapping on the screen to fire (although I would have like an auto-fire option), having to put the iPhone to my mouth and blow in it, while still sliding left and right to dodge enemy fire and tapping on the screen seems like an awkward position to be in.

Overall, I quite enjoy the gaming experience that Draco provides. The graphics are really detailed, the sound effects are sweet and being able to choose between different battle-themed music for the background did the trick for me. I was hooked!

And I bet you will too if you gave it a shot. For 99 cents, the game can really give you the fix you need on a boring rainy day and who knows, perhaps when the sun comes out, you won’t even notice!

Here's a demo video from the developers:

Have this iPhone Game already ?
What do you think of Draco The Dragon ? Scroll down for our comment section and let us know!

Leave a Reply to Vapssky Technologies