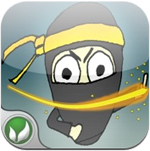 Egg War is perhaps the most entertaining game I've played all week. It's a whole new addition to the AppStore, released just today. And what a great addition it is. The gameplay is simple, addictive and entertaining. It touches your imagination and with some great graphics and artwork, we're looking at a potential winner here.

In Egg War, you need to protect the egg farm and the Angle eggs that are running around the filed trying to make their way home. Protect it from what you ask? Well, it seems that Satan has spawned himself an army of eggs and is trying to invade your egg farm. Your finger is the only one standing it its way.

Egg War is a type of tower defense game. As enemy eggs appear on the screen, you need to squash them, either by swiping across it on the screen, or by simply touching it. Things would be easy if there wasn't the potential for victims of friendly fire. On your screen, both Satan eggs and Angel eggs will be running around, bumping each other and the sides of the screen. You need to be careful to squash only enemy eggs, lest you lose a life. And you only have three to spare. If either an enemy egg reaches your egg farm or you squash an Angel egg, you lose a life.

It's one crazy game

Egg War is not an easy one. At times you'll find yourself looking at the screen and just frantically hovering your finger above it. The higher levels seem to get pretty crazy, with a horde of Satan eggs running around your screen, mingling with your Angel eggs, so that you'll never be really sure what you might hit unintentionally.

As if all this running around wasn't enough, each new level introduces a new type of egg. Each egg has a special skill, and every new level both armies get reinforcements. Squashing enemy eggs will earn you stars. You can later use these stars to summon your own army. The first combatant that you can summon is a Ninja egg (it costs 5 stars). This egg will also run around the screen and whenever it bumps into one enemy egg, it will squash it and then die itself. Pass through two more levels and you can summon a Knight egg (15 stars) to fight by your side. This little egg will take down three enemy combatants. Monks (30 stars) are another interesting addition. They will go forth and preach the word of the Lord, so to speak, converting any enemy egg they touch.

Satan isn't standing around either. He can summon trolls (they take three swipes to squash), Wizards, which can disguise themselves into whatever egg they touch. These are pretty scary, because after they touch one of your Angel eggs, they'll look just like one. The only way you can tell them apart is to pay attention because sometimes the fake eggs will get a purple ring around them. That's how you'll know.

The game is insane and insanely addictive! There are 9 levels to play in before you go to play in the Survival Mode. This is where Egg War is fully integrated with OpenFeint, so you can share your scores online.

On the down side, I did find the game to a bit too hard to work through the levels. Perhaps it was done intentionally by the developer, I don't know, but one thing I do know that I'll be playing it seconds after I finish writing this review.

The game clearly takes quick thinking and energetic swiping skills to get it done. Pick it up now from the AppStore and you won't be sorry!

Have this iPhone App already ?
What do you think of Egg War ? Scroll down for our comment section and let us know!