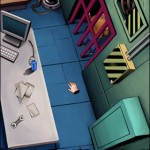 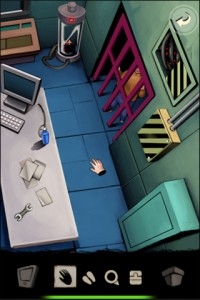 This is the sixth room that you’ll find yourself in - entitled “Trap.” If you want to take a look at our walkthrough of the Fifth Room you can find it via the link. So fire up your Escape The Room 2 game and let’s go!

Room 6 was the easiest room we’ve been in so far. After you talk to the kid (I hope he gets punched by the end of the game), go to the east wall where there’s a man behind bars. You find out his name is Kevin Bacon (like the actor), he’s a scientist and you’re in his laboratory. You also get a hint that his very fond of cleanliness and hygiene. 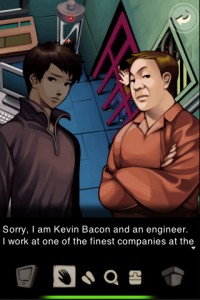 Time to pick up the items you’ll need to finish the level. There’s a water displacing spray on the desk, near the mouse. A cup of coffee is near the computer monitor and a screwdriver is in the toolbox on the desk.

The screwdriver is the key in this room. Use it to open the panel in the Northwest corner to get the eye of sight. Open the floor panel near the electrical wiring in the Southwest corner to get the gold key. The same screwdriver will open the panel near the prison bars and the one on top. The panel on top will reveal “Hidden cursor - Magic cursor.” Note to self, I still don’t know what all these things do, since they’re not going to your inventory.

Also “useless” is the jigsaw puzzle 6 in the desk drawer and the stick lying on the floor, near the locker in the Southeast corner. 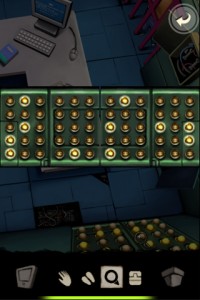 Not as useless is the coffee cup you’ve found earlier. Open the inventory and separate it, then combine the straw that you got with the water displacing spray. Use that on the locker and then pop it open. You’ll find a foil inside, which you can separate in the inventory two times to get two fuses.

Open the panel near the prison bars and place each of the fuses in there. That will turn the power on to all the equipment in the room, including the computer and some fast-flashing light bulbs on the South wall. If you watch the light bulbs, you’ll see that they flash in a pattern that reveals four numbers. There’s a really easy way to see these numbers if you just squint your eyes and focus on one number at a time. You can’t go wrong. 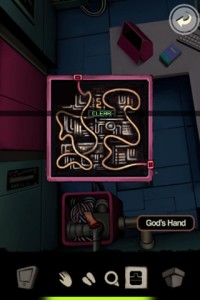 Input the four numbers in the computer and you’ll have unlocked that too. Kevin Bacon is a bit pissed you’re touching his stuff. He’s a bit psychotic. Once you unlock his computer though, you’ll also unlock a container that kept you from reaching in to get those insulated gloves in the Northeast corner. Get them now and put them on to use in the electrical wire box in the Southeast. I sure hope you didn’t touch those wires without the gloves (hint: you’d have died).

Next up you need to solve a puzzle to open the door and leave the room. You need to connect the wires between them and to the two outlets. Just slide squares around until you connect them all. The solved puzzle image is on the left.

Once you solve that, the door will open and once you leave, Mr. Bacon will scream after you, but there’s nothing you can do to help him. He’s made his bed, now let him sleep in it, as dirty as it may be.