Home » Funky Bee Will Bewitch You With Some Sublime Graphics 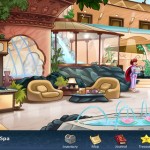 Funky Bee Will Bewitch You With Some Sublime Graphics

As we know by now, all bees have a queen. So, what if we got a little carried away and imagined all these bees living in a castle instead of an ordinary hive, being ruled by Her Royal Beeness, Queen Groovisma. And, as story goes, the bears are threatening to attack, right after some mysterious outages have already hit the castle. This leaves Her Royal Beeness in great danger, with no one to save her, but you. So grab your iPhone and iPad, and download Funky Bee today. Clear all quests, defeat the villains and restore the order by saving the queen.

What is Funky Bee?

Funky Queen is a story-based quest game, where you have to clear puzzle quests to collect coins and other treasure items. You can then choose to spend the coins playing some of the mini-games in FunkyBee that actually cost you money, like the slots machines or other similar games. There’s even a rudimentary version of Bejeweled to play.

The quests themselves are not entirely difficult and most of the times you’re able to figure out what you need to do in the mini-games. There are occasions where you’re desperately looking for a help button, a hint icon, something, something to tell you what you should be doing to complete the mini-game. My one advice would be to put that search aside and try to decipher what the game wants. Most of the times, you just need to pay a little attention.

FunkyBee has some amazing graphics. The magical world around the game is both colorful and a-buzz. The music and sound effects are something to work on (to me they sound like taken right from a medieval game), but you will forever be lost in the sublime world once you start the game.

The one thing that bothered me was the lack of information. I often found myself not knowing where I needed to go next or how to get there. The journal will list your current quest and what you have to do, but there’s no easy map that you can access in order to see how to get there.

And don’t think that “there” is just a bee-hive. The in-game world is pretty huge, with over 35 locations to explore. Each location is not that big on its own, but they way that these are connected to each other will definitely puzzle you.

The ads…well, I could do without them, although I understand the need for the development team to stay afloat financially. As such, I think a lot of the users would be more than happy to buy a full version without ads from the get-go, instead of relying on in-app purchases.

I would still say that Funky Bee is worth more than a shot. The quests are pure entertainment, the mini-games are fun and the ads rarely get in the way, as annoying as they are. The game is free to download, on top of that!

Have this iPhone Game already ?
What do you think of Funky Bee ? Scroll down for our comment section and let us know!

Leave a Reply to Capitalharmony777