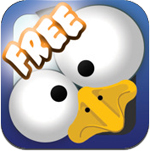 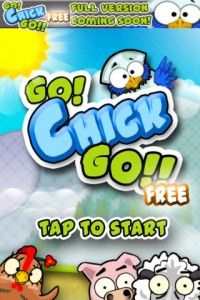 I had a dream* last night. I dreamt I was a chicken on the farm, freshly hatched from my egg. All the other animals on the farm hated me and wanted to cut down my wings. All I wanted was to fly higher and faster than anyone else. My only weapons were my speed, agility and, oh yeah, ye old corn gun. Woke up this morning and found out there was an app for that: Go Chick Go Free.

How to play Go Chick Go

There’s one rule in this iPhone game: never stop flying. Your goal is to fly as high as you can and avoid the other animals. To avoid them, all you have to do is move your chicken from side to side. There’s no up or down in the game, just left and right. You can’t accelerate or break. Your only defense is your agility here.

Be careful to avoid the animals at all costs. You have an energy bar to look after too. If too many animals hit you, you lose energy and you won’t be able to fly anymore. So what animals want you dead? Well you have your pigs, your sheep and your occasional jealous chicken.

From time to time, upgrades will appear on the screen. Position your chick on the screen to catch them and tap on them once you have them to power-up. For now, I’ve seen only three upgrades, but hopefully in the full version more will be available.

The hamburger will give you more energy. The corn will let you shoot other animals down from the air. The rocket pack will make you fly faster and destroy animals in your path. The longer you play the better these updates become. For example, you can get a faster rocket pack or a more effective corn gun. Now that’s something worth playing for!

While Go Chick Go Free is surely a game that will keep you playing for hours, I’d love to see some improvements made to it that will make it rival any game in the App Store. For once, the iAds at the top of the screen are slowing the game down. Don’t get me wrong, I understand that the game is free and some sort of income is needed to keep it like that. I have nothing against iAds. But in Go Chick Go Free, the ads slow down the game. When the ad changes, there’s a short delay where you can’t move your chick at all and you’re exposed to the wave of animals coming at you.

I’d like to see more upgrades in the future versions, including some more interesting weapons (perhaps a tomato gun that shoots tomatoes that splash pigs from the sky - that would be fun) and more speed upgrades (how about a “Call Mother Hen” button that will call the mother hen to help the little chick fly faster).

All in all, I think Go Chick Go is one of those games that you’ll remember for a while. It might not be the next Angry Birds, but I can’t wait to see the full version get released. Until then, go grab the free version from the App Store NOW!

* Ok. I didn’t actually dream this, but you gotta admit it was a nice intro to a nice iPhone game :)

Have this iPhone App already ?
What do you think of Go Chick Go Free ? Scroll down for our comment section and let us know!