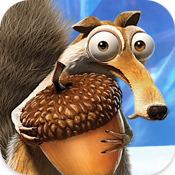 Going Nuts For Nuts With Ice Age Dawn Of The Dinosaurs

If you remember my review of Ice Age 3D (yes, the game that really disappointed), well, then pay close attention here. This new release is a must-have for any true iPhone gaming lover, not to mention Ice Age fan. Upon seeing the screens in the previews, I just knew I'd love the game, and I wasn't wrong at all. This adventure game is fantastic on all levels, from stunning graphics and hilarious sound effects, to a truly exciting gameplay.

Get Completely Immersed In The Pre-Historic Age

Ice Age Dawn Of The Dinosaurs is nothing like it's predecesor. Usually, you think of games that are tied to movie releases as unpolished, uncreative and rough ad pitches only meant to promote the movie itself. I'm glad it's definitely not the case with Ice Age. The game doesn't mirror the movie and that worked towards its benefit. Within minutes of firing up the game, I was completely caught up in the storyline, stunned by the graphics and everything else around me kind of faded away. I was Scrat and that's all that mattered. In the four game levels each with its set of chapters (36 in total), I had to collect all of the scattered nuts (yes, I know, it's really funny how the nut-crazy squirrel always misplaces his nut). I had to move around maze structures, climg ice blocks, jump around trees and generally go to amazing lengths to get that precious nut.

Basic character movement is well implemented in Ice Age: Dawn Of The Dinosaurs. Simply tapping on an area of the map will move Scrat in that direction, provided that area is accesible to him and there are no obstacles in the path. The game (and the movie) might be an animation, but you're not dealing with Super-Squirrel, so the general laws of physics do apply. If the area is not accessible to him a red flare will appear on the screen, denoting that it's not possible for him to go there (directly, anyways).

Occasionaly, you get those obstacles in your path. Solving each block-moving puzzle game takes a bit of patience, and watching out for those enemies that may attempt to make you forfeit the game is another thing to consider. Solving the puzzles generally involve manipulating the obstacles themselves. You can move ice blocks around, climb them, hang from jungle ceilings, pull blocks and push them around to fill in gaps in the scenery. Funny addition: Scrat can float in the air inside a bubble (you might remember this scene from the movie itself).

Enemies will also try to stop you collecting nuts and getting to the exit point of each chapter. Some are easy to avoid as they only follow a pre-determined path, patrolling one area or another, while others will chase you on sight, so it's up to you to get away from the danger of being eaten alive. Timing and dexterity are the important skills to note here. One cool trick is to stomp the ground and make any loose bits of scenery nearby fall onto the bad guys that happen to be underneath. To make Scrat stomp, simply tap him.

You can finish the game early by getting to the exit point of the various chapters, even if you don't collect all the nuts along the way, but any Ice Age fan and gamer will tell you the same thing. The game is not a drag race to the finish line, but more of a drifting experience through the game's chapters, enjoying the cool animations and sweetly polished graphics. Scrat only has one life, luckily there are various checkpoints, so if Scrat gets killed, you can resume from your latest save. That's a true time (and life) saver right there!

A Game That Has It All

Some might say they would like to see the movie's protagonists in the game, but it's obvious to me that the one thing that captured anyone's attention with Ice Age in the first place was Scrat in his race for the holy nut. So placing him in the game's hot seat is the appropriate, ney, the required choice.

Graphically, Ice Age Dawn Of The Dinosaurs is simply stunning. The game's polished graphics ooze realistic textures and smooth animations. The game will have you immersed in the prehistoric age in no time. The game is tagged at $4.99, and worth every penny of it, but right now it's currently on sale for $1.99 as part of a Holiday special deal.

Ice Age Dawn of the Dinosaurs

Have this iPhone App already ?
What do you think of Ice Age Dawn of the Dinosaurs ? Scroll down for our comment section and let us know!.