Home » Express Yourself With Emoticons

Express Yourself With Emoticons 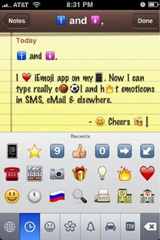 The online culture has been rapidly growing and given birth to today's generation, or what others have dubbed - the "Messenger Generation." The use of shortcuts when chatting with friends online has been under a lot of criticism. Although it's purely debatable whether "brb" or "ttyl" is undermining education, one thing is clear enough: the use of small pictures to add expression and emotion to the otherwise plain instant electronic message has grown as an integral part of online writing. For a device such as the iPhone, missing these emoticons was clearly not acceptable. Enter iEmoji to bring emoticons to your finger tips.

iEmoji allows iPhone users to turn on their emoticons while writing an sms, note or to-do task. If there's writing involved, emoticons are available. By turning on this option under the international language settings for Japanese, you have an additional button on your keyboard filled with emoticons at your discretion. The coolest part about it is, though, Whenever sending an sms or email to your friend's iPhone, they will be able to see your emoticons even if they do not have iEmoji installed on their device. On the downside though, is that iEmoji's emoticons will only be visible to iPhone users. Other types of cell-phones, or any IM client on the internet, will not support the emoticons, and will be replaced by a blank square.

Opening the app itself will simply list the catalog of available emoticons, divided into separate categories. To actually install the ability to use them, even though you've already installed the app on your device, you have to go into Settings, International, and activate the newly installed Japanese keyboard.

Once installed, simply write the SMS or whatever you're writing, and tap the Globe icon next to your Space Bar, and the emoticons will pop into place. Tapping one will make it appear in place of the cursor in your text. It's as simple as that to make use of hundreds of Emojis readily available to you.

If you're into texting with friends all day long or used to chatting online from your device, the $0.99 price is a bargain for anyone. The huge variety of emoticons the app installs makes iEmoji a must-have for today's mobile generation.

Have this iPhone App already ?
What do you think of iEmoji ? Scroll down for our comment section and let us know!.