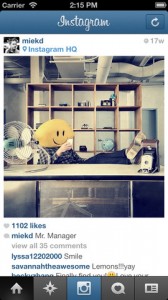 It allows, neh, it empowers users to share their photos, their Kodak moments, their memories, if you will, with the world. Its community counts over 80 million users and its Facebook-acquisition has been the talk of the tech world. Its AppStore description reads on the first line simply: Instagram.

For those of you who've lived under a rock for the last two years, Instagram is the iPhone app to have with you if you're into photography and sharing your photos. Although it currently has strong competition from the likes of Flickr and 500px, Instagram is still the app on everyone's lips and its name is still the source of inspiration for so-many Insta-apps in the AppStore.

It's dead easy to use. Open the app, create your free account, and start taking pictures. Tap the camera button in the middle of the tab bar, snap a picture or pick one from the Camera roll and choose from a multitude of beautiful filters specifically designed to make your photos gorgeous. And share. Twitter, Facebook, Flickr, Foursquare, or even Email. You can do them all from one simple screen. It stands as an example of beautiful design combined with thoughtful interactions.

Sharing is fun, for sure. But so is seeing other people's photos on display. "Aw, look at the cute cat" or "Loving the new recipe @jamieoliver" - no matter what you're into, an Instagrammer is sharing it out there. You choose who to follow and once you follow them, you'll see all the pictures they share with the rest of the world. You can either keep in touch with your office co-worker or enjoy a stream of photos taken by Beyonce half way around the world in a concert.

You can like a photo by simply double-tapping on it or be kind enough and leave a comment. The sharing is sincere, there's no privacy control or other convoluted settings. It's share and enjoy. So what are you waiting for? Invite your friends to join you. You can do so via the app's own Find friends setting. Super easy.

And then came the Facebook-aquisition

Earlier this month, Instagram dropped support for photo embedding in tweets, so sharing an Instagram photo on Twitter will no longer show the photo within the tweet, but rather just display a link to it. It's a noticeable effort to drive more people toward Instagram's own website, by implicitly driving users away from Twitter. It's no doubt the move has Facebook written all over it.

But eventually, Instagram will need to figure out a way to monetize. In a recent interview with Facebook's VP Carolyn Everson (link here), the question of "Will you put ads in Instagram" was cunningly dodged with the simple answer that "Eventually we'll figure out a way to monetize Instagram." This doesn't necessarily mean that the revenue will come from adding sponsored ads in users' photo stream. But it doesn't mean that it won't happen either. After all, the $1 Billion acquisition price needs to be justified.

Have this iPhone App already ?
What do you think of Instagram? Scroll down for our comment section and let us know!