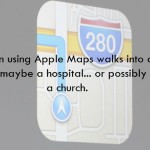 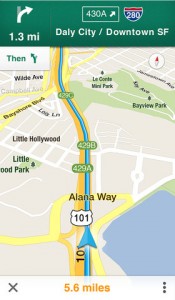 Since Apple's iOS6 debut, the company removed Google Maps as the system's default Maps app and replaced it with its own internal creation, which people have dubbed to be an abomination. Memes started springing all of the internet, some straight up funny, others as silly as the Maps app. My two favorite memes have to deal one with Star Wars and the other with one of the most used joke intros of all time (photos courtesy of weknowmemes.com and mysmartprice.com respectively.)

While the punch lines may still very well apply to the default Maps app, iOS users now have an alternative in the form of...wait for it...Google Maps. Yes, that's right. The internet search behemoth has finally released its own maps app in the AppStore. And the Apple review team has approved it, thereby making it, within 24 hours from its release, the number 1 top free app in the AppStore. Between you and me, I had no idea people were using the Maps app that often or holding it that dearly to their hearts. I rarely venture out into Apple Maps' un-documented areas, so my own opionions should be taken with a grain of salt. 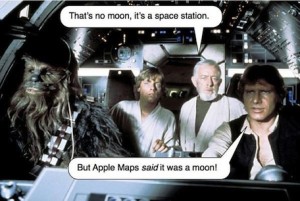 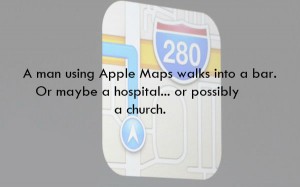 It seems that Apple removing Google Maps as the default maps app has driven the Google team to push themselves beyond the limits and design an even better Maps experience. The new design is less cluttered, the UI is aligned with Google's new flat design that was applied to Google+ and the new Gmail (a design quite distinct from Apple's own apps), and it comes with vector maps tiles and turn by turn navigation.

When first opening it, you need to agree to the terms of service and you're prompted to sign in with a Google account. You can safely skip this and the app will still be fully functional.

Feature-wise, I didn't notice a bigger difference from its predecesor. You can still search for addresses, local businesses or places using Google search. You have Street view. You have your pick of Satellite, standard maps or Hybrid. Apple Maps also has the 3D view, which although is not available everywhere, does offer some impressive views of New York's Liberty Island or London's Big Ben.

You still have directions, whether you're driving, walking or want to take the public transportation. In some areas, you also get traffic information. A nice addition there.

What has really changed, or rather been added, is the turn by turn driving directions. I don't drive or own a car, so I couldn't put this to the test. I would expect your mileage to vary nevertheless. If your particular area is poorly documented on either one of the apps, then turn-by-turn directions won't work that well for you. It is true that Google's own maps should give you better results, since Google has been doing maps for a while now, while Apple just started, what three months ago?

Signing in with your Google account will let you save your favorite places and destinations, remember past searches and directions and share data between computer and phone. However, you can't search for through your iPhone contacts, no matter if you're signed in or not. Pitty.

The few times I did use Apple's Maps it was to search for a location or for the nearest Starbucks via Siri. It hasn't failed me yet, but what if you want to use Siri with Google's Maps instead of the default app? Well, Jailbreaknation.com says it's as easy as adding "via transit" to your regular search. You can read their full article and watch a demo video here.

Now, there's no telling whether the memes with Apple Maps will stop. With Google releasing its own Maps on the AppStore, Apple is sure to have its own revamping of Maps to try and set the bar higher. This can only benefit us, the users. One thing's for sure. Luke Skywalker will not likely walk into a trap due to faulty map directions and every man will know exactly where he walks into.

Have this iPhone App already ?
What do you think of Google Maps? Scroll down for our comment section and let us know!