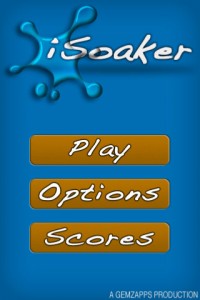 Look. I’ve never been to a carnival where you get to squirt the monkey to the top to win the big stuffed panda bear. So iSoaker’s AppStore description didn’t really speak my language. It wasn’t until I read more on the description and saw the demo video that I understood what the app was about. And while I tend to believe that girls will be offended by the iSoaker Youtube demo-video (embedded below), who’s to say that everyone else won’t enjoy this iPhone game?

There’s not much to playing the game. You have to shake your iPhone continuously until you hear a bell. That’s your signal that the pressure is high and your gun is loaded with liquid. Take aim by touching and dragging the crosshair on the target and press and hold on the pressure gauge on the bottom-right to release liquid. You rack up points for hitting the target as close to the center as you possible.

iSoaker gives you a bunch of options to play around with. You can change the color of the liquid on a RGB scale (by changing the red, green and blue values that make up your final color). You can also change the viscosity of the liquid, on a scale ranging from water to honey. The final and most interesting piece you can change in iSoaker is the target. While you can certainly shoot at the default bullseye, where’s the fun in that? Why not change the default target and choose a picture of your friends, your dog, your car or a flower that you can soak.

In iSoaker, you have to build up pressure as you load your gun with water, take aim and fire to rack up points. Unfortunately these points lead nowhere and what could have been a great game falls short…really short.

The game has virtually no replay value. If you play it once, that’s about as much satisfaction as you’re going to get from it. The liquid color and viscosity options are not what I was looking for. What I really yearned for was the GameCenter integration and the fun it brings with it.

Where are the achievements? iSoaker is a fun game only by nature, but what if you supersized the fun with some awesome achievements based on your score, how much you’ve played the game or the liquid options you used.

Multiplayer. This one is a biggie. Yeah, you can soak a photo of a friend, but what if this can be a contest in real time? Two friends get together through GameCenter and soak each other. Their weapon of choice and the wind conditions affect the outcome of course.

iPad version. The system needs to be completely rethought for the iPad. Nevermind the graphics and the fact that you can't really hit the target on the iPad, but shaking the iPad with two hands? The game is clearly built for the iPhone.

iSoaker was an app that you could easily pick up, but just as easily put down. It felt very much like a pre-alpha, albeit bug-free, version of what could have been more. Spending more time on the graphics, on integration with GameCenter, achievements, and a probably awesome multiplayer mode would have made iSoaker worth your trouble. But right now, for me, iSoaker proves that the Apple Approval process still has gaps in it and that it encourages everyone to create apps, no matter the benefits it provides to the end user.

Oh yeah, and why does every iOS app has to to bear the standard name of the letter “i” plus the name of the app?

Have this iPhone Game already ?
What do you think of iSoaker ? Scroll down for our comment section and let us know!