Home » How To Play Tangrams In A Whole New Exciting Way 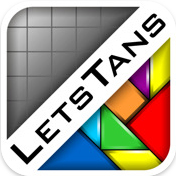 How To Play Tangrams In A Whole New Exciting Way 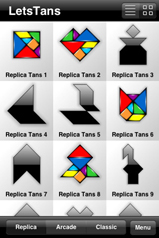 All you need is an iPhone and LetsTans. Upon first being asked to review this game, I must admit I was a bit in the dark about Tangrams, what they are and the basics of the game. And after playing LetsTans for the first time I was still a bit in the dark. And my point here is that this is the main downside of LetsTans. It assumes that you already know what Tangrams are and how the game is played, as the first screen that pops out upon opening the app is the different puzzles you can solve. Tapping on any of them will take you to the actual puzzle, and you will get a board filled with colorful shapes and no real clue as to what you're up against. The clock is ticking nevertheless, and you find yourself tapping on the shapes until you see the little plus sign at the bottom of the screen. Alas, there is a help section. You read the rules and off you go.

A Niftier Version Of The Classic Chinese Game

When rules are clear in your head, the game seems to have a purpose now, and gameplay is really fun and addictive. The first thing you'll notice is that the game makes use of brightly colored mosaic tiles to create tangrams. The classic version of the Chinese game is simpler and, in my humble opinion, easier to figure out, as you're not distracted by the happy colors.

To put it simply, the idea behind tangrams is to re-create the shape shown in the box using the tiles provided for you on the board. You can rotate the pieces, move them around, or flip them. In LetsTans however, you're not allowed to move the puzzle pieces. Instead, you have to recreate the shape using somewhat different and more challenging rules.

LetsTans provides you with three different game modes. In Replica mode, you have to pay attention to the shape in the box, and then find and tap exactly seven shapes (called tans) of different colors to replicate that puzzle shape. The tans are mixed on the board, so you need a careful eye to catch the shape. Tapping on any one piece will highlight it, so it's easier to see what the remaining pieces are. I found this one to be the most difficult game mode, super fun nevertheless.

The Arcade mode will provide you with the shape to be replicated and blur out the rest of the board. Your task is to trace and fully capture seven different colored tans with the shape. You can move it around the board and fit it nicely when you've discovered the shapes required. There are a few tricks here as well (that are a bit hefty to get to). You can rotate the board by swithcing the iPhone to landscape mode, or flip the mask shape by double tapping on the screen. Until I read the rules with this, I was again a little puzzled by the game mode.

The Classic game mode will bring you back to playing regular Tangrams by fitting the tiles into a given shape. I guess this would be the easiest of the three, as it's the most accessible.

One thing is clear about LetsTans, it's one of the most polished games I've seen in the AppStore to date. The controls are really smooth and responsive, while the puzzles are steadily increasing in difficulty. The developer brags with over 200 different puzzles, each hand-crafted, and over 64 Tangrams shapes. Each puzzle has a time counter with a pause option and an advanced hint system. Clearly a lot of effort has been put into this game, and for this we commend the development team.

If you're in the dark about Tangrams, I suggest you take a second and read up on some of the basics of the game, maybe even try one classic game online (you can find one here). Then you can move on to the iPhone version. Take into consideration however that LetsTans is not a simple emulation of the game on iPhone, but it brings new features, new rules and it takes these puzzles to a whole new level. The game is currently on sale for $0.99 for the Holiday period, and the new update just got released a few days ago in the AppStore, so the new set of features like a visible timer on each puzzle, a pause option and a nifty option that opens the last played puzzle on a new launch of the app, are hot off the oven. I'd wholeheartedly recommend the game to anyone interested in addictive puzzle games and especially fans of tangrams.

Have this iPhone App already ?
What do you think of LetsTans ? Scroll down for our comment section and let us know!.