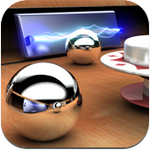 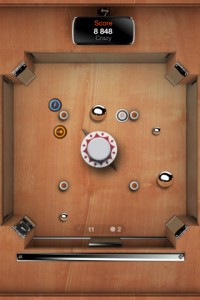 I believe we all know Pong and what it has done to gaming ever since the industry's very beginnings. Over twenty years ago, Pong was just some black and white game similar to tennis, where the two players involved would just try to outsmart and outmaneuver each other and put a white dot behind the moving white line at the opponent's side of the screen.

Not today! Twenty years has done much to gaming, technology and, now, with MultiPong, the simple game of Pong itself is revolutionized with stunning graphics and sounds, creative multiplayer gameplay, but still keeping true to its roots.

For those that don't know what I'm talking about, the goal of the game is to hit the pinball past the other player's paddles and, at the same time, defending your own. Simple enough to do, fun to enjoy.

It's all about multiplayer

MultiPong, as the name suggests, is better played with friends. How many actually depends on your device. You're looking at 1-2 players for your iPhone or iPod Touch and up to 4 players on your iPad. The multiplayer mode is actually where the game rocks.

Sure enough you can play in single player, but beating the computer hasn't changed since the 80s. There's no fun in it anymore. Call up your buddy and challenge him to a MultiPong game on the same device, and you're looking at some great fun times ahead.

You need just one finger to control your paddle, which makes it easy to fit even four players on an iPad. My favorite mode is the two player mode, perhaps because I don't have four close friends that I can bring in the room together and trust not to hit my iPad.

In two player mode, on the iPhone, you control your paddle and try to outmaneuver your opponent. Play close attention to the bonuses that appear on the board, If your ball goes over one of them, you get an upgrade (careful, not every upgrade can work to your benefit). Also, use the bumpers on the four corners of the screen to outflank your opponent and score a point.

And we've come to one of the games strongest points. MultiPong is amazing in terms of the artwork and sound effects involved. Looking at from a bird's eye view, you really feel like you're playing on an actual board. The artwork gives the board depth, so it looks a bit like it's an actual arena. It's actually one of the reasons why the game is so addictive.

Apart from choosing how many players will get in on the action, you also have 7 game modes to choose from, each with different rules and some with close to no rules at all (apart from beating your opponent anyway you can). Additional value is added via GameCenter, with leaderboards and achievements.

Have this iPhone App already ?
What do you think of MultiPong ? Scroll down for our comment section and let us know!