Home » My Virtual Girlfriend Is One Sizzling-Hot iPhone Game 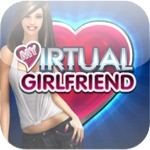 My Virtual Girlfriend Is One Sizzling-Hot iPhone Game 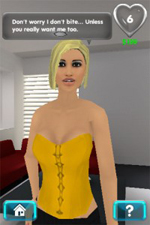 Fair warning is due. If you're not into this type of simulation games, you'll be a bit disappointed by what you can actually do in it. There's no adventure, there's no fantasy and (despite what you might have wondered after seeing the title), there's no sex involved in My Virtual Girlfriend. All this is not to say that some gaming enthusiasts amongst you will not definitely enjoy this release.

I've reviewed similar games in the past (see MyGirl), but they lacked the depth that My Virtual Girlfriend provides. There's a big variety of interactions you have at your disposal. It's not really a full-fledged Role Playing Game, but it does follow along these lines.

Matchmaking in the works

The first step you have to do in My Virtual Girlfriend is tell the app a little something about you. Pick your name there Don Juan and rate yourself when it comes to your looks and your personality. Then do the same for your soon-to-be girlfriend. The app picks three girls closest to your suggestions and you pick one of the three (yes, Don Juan, just one). Let the game begin!

Once you've selected your favorite of the three, you're taken to the game screen and you can start fiddling with it (no pun intended). The app generates the environment (which is probably your apartment, not the girl's) and you see the girl you've picked on the screen. And you basically have four things you can do as you progress through the game. You can talk to her, you can touch her, do activities or take actions.

Talking to your virtual girlfriend

Talking to her involves her asking a question and you answering. This is the most confusing part of the whole game (as in life, of course) as you don't always know how the girl will react to your answers. You can answer by basically rating the question she asked (often it's rhetorical) on a scale from "Awesome" to "Yuck." If you misinterpret the question and pick the wrong type of answer, you're automatically deducted points. I've never actually leveled down, which means that you can get as many answers wrong as you want and keep going at the same level. On the other hand, when you answer right, you get points. Get enough points and you go up a level.

The game is full 3D, so you can zoom in, zoom out (some pinching is involved) and rotate 360 degrees. This being said, if you want to touch your girlfriend on her butt-cheek, that's possible, although not recommended in the first few levels of the game. Touching her belly will normally make her giggle (most girls tickle right?), although if she's not in the right mood, she'll get upset.

Doing activities with your girlfriend

The game revolves a lot around these various activities that you can do. Most of the activities will cost you money, while some will earn you enough dough to keep her happy. As you progress through the levels, more activities are unlocked, so you never run out of things to do with her. You can buy her flowers, jewelry, clothes, shoes, take her to the comedy club dancing and what not. All these will cost you money. Choosing to go to your job will earn you a salary, as will recycling, and other not-so-fun activities. You need to balance out the money-consuming with the money-making activities, not only because of being broke, but your girlfriend needs you around a lot. Spend too much time at your job and she'll get mad.

These are the things that will usually not cost you any money and will hopefully get you up through the levels. You can tell her a joke, read to her, hold hands, tickle her, kiss her and later on make out with her or give her a spanking (yep, that's as far as it goes).

My Virtual Girlfriend has virtually infinite levels. Yes, that means you can have your happily ever after. Essentially, the game stops being that interesting after level 20, which is the last level that adds any new actions and activities. Spanking is fun, but you can't really do it indefinitely.

You progress throughout the levels by scoring points with your girlfriend. These points are represented in the upper-right corner of the screen by a heart that fills up red. When it's all the way full, you level up.

One perhaps good addition when it comes to the first stages of the game is the ability to create the girl exactly as you want it, at least when it comes to looks. So instead of the app suggesting three girls for you, why shouldn't you be able to design one yourself?

The other thing is definitely the graphics. The game is in 3D, but that doesn't mean it will look very stylish. The graphics are sometimes pixelated and pretty rough, which definitely decreases the quality of the game.

Have it already ?
What do you think of My Virtual Girlfriend ?   scroll down for our comment section.