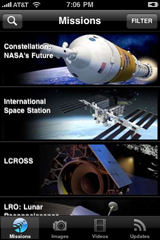 NASA released its first official iPhone app to let anybody in on its ongoing outer-space endeavors. The app, packed with everything wannabe-space travellers and Universe enthusiasts would require, gives you detailed info about NASA missions, including images, access to NASA TV videos and live updates via Twitter feeds. On great feature of the app is the ability to track shuttles currently in orbit. What more would you want?

I was actually surprised of how much they packed in the app, while keeping an uncluttered screen that's easy to follow along with. At startup, the app shows you a scrolling list of NASA's current ongoing missions, packed with high-res images. Tapping one specific mission, will take you to the next screen where you can read up on the mission description, objectives, its status and, if the mission is not yet completed, you'll get a nicely designed countdown clock at the bottom of your iPhone's screen.

The great part of this app is of course having access to the high resolution photos and videos that, even though you already have them on the NASA website, it's nice to be able to get them via your iPhone. The app itself is a great mobile to showcase the organization's work to iPhone enthusiasts. The app also lets you pass along images, mission information and videos to your friends in the form of an email with an embedded link to the NASA web page. Images can be viewed in both landscape and portrait mode, and even saved to your iPhone's camera roll.

Any update for the missions will be showcased with the familiar red badge next to its name. The same goes for new video uploads, images and even Twitter messages. On the Missions screen, you can filter through the available data, and select the types of missions you'd like updates on (Earth, Solar System, Launch Schedules).

The app also features a selection of videos which you can play via YouTube. So if interviews with NASA scientists or documentary-style videos about the Universe and NASA going-ons are your thing, then give the NASA app for iPhone a try. The app is free to download from the AppStore.

Have this iPhone App already ?
What do you think of Nasa App ? Scroll down for our comment section and let us know!.