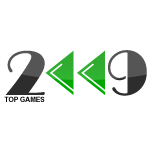 Continuing the Top Apps for 2009 is our picks for the best games for the year. Again, let me remind you that you should take this with a grain of salt, and that it's always hard to decide which is better, ney, which should be on this list. I'm writing this in hopes that you will gain some perspective as to what are the features that were most common and most sought after by the users. I would rather say that these are the games that in 2009 made good use of the iPhone's capabilities, were a bit innovative and made our lives that much more pleasant. Enough said!

FIFA10. The first thing to note about it is how little has been actually stripped from the console version. In addition to your standard "Training," "Penalty Shootout" or the basic "Kick Off!" the game offers three extra game modes for your delight, each with its own twists and specific game play. The awesome thing to note here is that with FIFA10 you get to experience the game from all perspectives involved: the manager, the team player and the team. Read our full review here.

Shrek Kart. Comparing Shrek Kart to a true kart racer would be pointless. We're not looking a incredible game play, exciting twists nor a competitive race. But with Shrek Kart you can see your favorite characters again on screen. And there are plenty to see. You'll be taken back to Shrek, Donkey, the Ogre Triplets, Fiona, the Gingerbread Man, and even The Ghost of Lord Farquaad. Read our full review here.

Worms. It was definitely one of my favorite games as a kid, and now it's the game that I could play while waiting in line at the groceries and before going to bed as well, without getting bored. A game that provides me with something different every time I play it. Yes, these little guys have really infested my iPhone. So grab your exploding sheep, holy hand grenades and homing missiles, stock up your bazooka and call in the Air Strike, cuz you're in for a treat in this turn-based madness from Team17. Read our full review here.

Rat On The Run. In this one, you need to get Ratty in perfect shape for the winter by fattening him up with all the cheese you can get your paws on. This is no easy task mind you. You need to watch out for spiders, slimy blobs and other baddies who'd rather see Ratty as a lab rat. Rat On The Run does give you a cool taste of classic arcade style games, combined with a pinch of puzzles and mazes. Read our full review here.

Asphalt 5. This is iPhone arcade racing at its best, and if you can let go of the habbit of racing with a Racing Wheel, Asphalt 5 should definitely be your pick for mobile racing. The beautifull thing in the game is the wide array of hotrod racing cars available, from the top-of-the-line Lamborghini and Ducati to the little compact Mini Coopers. Read our full review here.

Enigmo. The game is pretty old - it really stirred up spirits at the WWDC '08 and easily captured developers, reviewers, and users' attention. At that conference it was voted as "best iPhone game," a rank that Enigmo can easily compete for with similar puzzle games within its range even today. Enigmo proves that at the WWDC '08 it was already a game ahead of its time, and few games of such a complexity, great design and usability come close to it today. Read our full review here.

UnblockMe. It challenges you to a few rounds of head-banging on hard-wood bricks as you try to crack the code and squeeze through a set of blocks that slide dependent on each other's movements. The app provides you with countless hours of play packed with both enjoyment and frustration at the same time. The simple idea behind the game, simple and effective graphics and the lack of annoying sounds quickly made this iPhone app rise to the top of Apple's Appstore for Top Free Apps. Read our full review here.

Terminator Salvation Army. The game kept us wanting more at the end, topping what we've seen so far in graphics and sound effects for third-person shooters in the App Store. In Terminator Salvation Army you take control of human resistance leader John Connor and even a Terminator named Marcus Wright in an attempt to save humanity from Skynet and its army of Terminators. Read our full review here.

Toobz. This challengingly interesting puzzle game for the iPhone and iPod Touch lets you create your own system of pipes in a tetris-like game style, and start the water after making sure there are no exit pipes to leave it running on the board. It is perhaps on the border of time-waster at times, but definitely worth giving it a try. You'll know after playing the first couple of levels if you're into plumbing or not. Read our full review here.

Ice Age Dawn Of The Dinosaurs. The game doesn't mirror the movie and that worked towards its benefit. Within minutes of firing up the game, I was completely caught up in the storyline, stunned by the graphics and everything else around me kind of faded away. I was Scrat and that's all that mattered. In the four game levels each with its set of chapters (36 in total), I had to collect all of the scattered nuts (yes, I know, it's really funny how the nut-crazy squirrel always misplaces his nut). I had to move around maze structures, climg ice blocks, jump around trees and generally go to amazing lengths to get that precious nut. Read our full review here.