Home » Pocket Snapper Brings The Models To You

Pocket Snapper Brings The Models To You 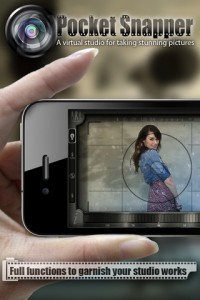 Being a photographer at the beginning of your career can be very difficult. Especially if you're more interested in portraits than landscapes. Going to a beautiful girl in the street and asking her to let you take her picture might end up in shouts and her calling the Police. Not to mention asking a professional model to pose for you. But all the laughing and the struggling to get these beautiful people in your pictures is over. Because now, you don't need real models to pose for you when you have Pocket Snapper. Download it from the AppStore, and check it out for yourself.

Pocket Snapper makes a junior photographer's life easier. Instead of going through the shame of asking random people on the street to pose for him, he has his own models to pick from. And that's not all the help that Pocket Snapper has to offer. Besides providing the artist with the model he needs, it also provides him with an entire Photo Studio, where he can take the pictures, edit them, see the final result, and share them. All these things can now be done with a single app. And this is Pocket Snapper.

The first thing to do after downloading Pocket Snapper is to create an account. However, you can still use Pocket Snapper without doing so. But this will mean missing out on all the goodies that Pocket Snapper has to offer for a certain number of pictures, effects, shares, and much more. The goal? To collect up to 3000 points and unlock the mystery model. That sounds like a challenge to me.

An entire photo studio in one app

With Pocket Snapper, you can take classic photos of the things you like, or take shots of the models available to pose for you. All you need to do to start the professional photo shoot is turn on the iModel mode, save one of the models you like, and you're good to go. And the really cool thing is that, just like in a regular photo shoot, the model will walk in front of you, posing, mimicking different feelings, thus allowing you to take the perfect shots. They don't just stand there or stop every second to signal that you should take the picture. They behave as natural as any other model, and it's all up to you to choose when to snap the picture.

Once you're done with your shots, it's time to edit them. No matter if the shots have been taken using the iModel mode or not, the processing is the same. You can crop your files, rotate them, add different effects and frames. You can choose how much of the picture to crop, or freely cut it using your finger. You can change the atmosphere, texture, or add special effects to your pictures. You can give the picture a bluish tone. Or create a special frame. Also, you can integrate your photos in all sorts of albums, using different styles. Just let your imagination guide you. And when you're satisfied with the result, save it in your Photo Library and share it with friends on Facebook, Twitter or Flickr.

Is it enough to make you a pro?

The only downside of Pocket Snapper is that everybody is given the same two models, plus the special one. This makes Pocket Snapper more an app that you can use to exercise your skills, rather than to actually take photos you can later use in a portfolio. However, the creators of Pocket Snapper might have already found a solution for this problem, confirming that, in a future update, everybody will have a chance to become a model. Therefore, anyone will be able to record himself or herself posing as a model, and share the video. So, who knows? Maybe the shy girl who didn't want to pose for you when you asked her will be brave enough to do so for Pocket Snapper.

All things considered, I don't really think that Pocket Snapper can be used as a professional tool for junior photographers to build a portfolio. But it's easy and fun to use, it's creative, plus it allows amateurs to improve their skills. And one thing's for certain: Pocket Snapper makes a lot of the other similar apps look dull in comparison.

Have this iPhone App already ?
What do you think of Pocket Snapper ? Scroll down for our comment section and let us know!