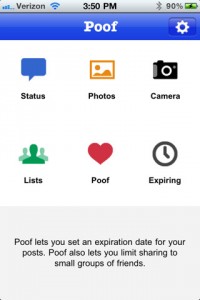 While I don’t understand why people would post all the crap that they do on their Facebook wall, I do see the need for a tool that controls who sees what you’re posting and for how long that post should appear in your feed. Enter Poof Pro, a tool that promises to give you back full control of your Facebook feed.

With Poof Pro you can set expiration dates for uploaded pictures and posts and limit sharing to smaller groups, instead of everything being visible to everyone.

Taking if for a test-drive

Since Poof got me intrigued, I decided to give it a go and shared a moment in my life on my Facebook wall via Poof. I opened up Poof Pro, and the app kindly asked me to login to Facebook, which I kindly did. All the app’s options became available to me now. I went straight for the “Status” icon and updated my status to: “Trying out Poof Pro on my iPhone.” I set an expiration of one hour after, which you can do using the timer icon on the bottom right of the edit screen. Available options were one hour, one day, one week, one month and never. Un-available options: landscape keyboard.

I checked my Facebook status online, and there it was. My first moment shared via Poof. I decided to go back there one hour later, but until then there was much more to discover in Poof Pro. Like the ability to upload photos, either from your camera roll, or take a picture on the spot. You can then upload the picture to Facebook, also with an expiration date.

The best feature by far was the Lists in Poof Pro. While the app is free, the lists extension is worth $0.99 as an in-app purchase. With lists you have an easy way to share freely with friends you trust. It’s essentially an extra layer of privacy on top of Facebook. So if you went to a party last night and don’t want your parents to see the photos, you can just upload them to Facebook via Poof Pro and have them be visible only to your Best Friends list.

These lists are either your existing friend lists from Facebook, or you can also create and choose who exactly gets to be in your circle of trust. Very handy feature!

With a simple tap you can also see what items you’ve set to have an expiry date in Poof, and also modify that date. The app’s UI is simple and intuitive, and I don’t believe any one should have a problem interacting with the app itself.

It was time to check my Facebook wall to see if the post disappeared as it should have. Sadly, it was still there. Something went wrong, apparently, so I logged in to Poof again on my iPhone to check the expiry date. It was only then that the post expired and disappeared from my wall. I decided to give it another shot, hoping that the outcome would be different.

I didn’t see a logic in having to be logged in to Poof whenever I had to expire a post.

Another hour and some minutes later…

Poof! The post disappeared as it should. I don’t have an exact count, but it took a few extra minutes after the hour passed to delete the post from my feed.

Have it already ?
What do you think of Poof Pro ?  Scroll down for our comment section.