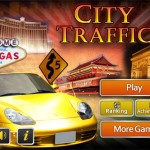 Are you looking for a simple fast-paced game with minimal control-usage? Are you into cars but don’t like racing games? Then City Traffic might be a good pick for you. In City Traffic, available both for the iPhone and the iPad, your task is to make sure that all the vehicles in the busy intersections in four different cities around the world cross the intersections safely.

Yes, if this game seems pretty similar to Traffic Rush, it’s because it is. The same basic rules apply here as well. Tap and swipe to control the vehicles in traffic. Make sure the intersection is clear so that vehicles can move about their way. Avoid all crashes at all costs.

You have two options when directing traffic. You can either stop the car completely, by tapping on it, or you can speed it up, by swiping it in the direction desired. Any vehicle that’s stopped won’t stay stopped for long. After a few seconds, it’ll continue its journey by itself, unless you stop it again.

Vehicles come from all four directions, so you need a careful eye and a steady hand to get all of them to safety. Vehicles include police cars, vans, fire trucks, motorcycles and bicycles, among others. Each vehicle has its own speed, so you need to account for that too when speeding things up.

What sets City Traffic apart is the option to play in four different cities: Las Vegas, Beijing, Paris and San Francisco. Each of these cities their own quirks in the intersections, so you need to be on your feet if you’re going to succeed as a traffic manager here.

You start off with Las Vegas. The city features the simplest intersection of the four. It’s a basic left-right, up-down direction on your screen, pretty much exactly what Traffic Rush entailed.

While Las Vegas is a rather easy task, Beijing and especially Paris are not. I must admit I haven’t played San Francisco just yet, as Paris is giving me a headache. With every new city, the traffic patterns change, amounting to a whole new way to direct traffic and plan for every vehicle entering your intersection.

In Paris, you’re looking at directing traffic around the Arc de Triomphe. And it’s a pain in the arse. You have cars coming from 6 different directions, each with its own destination, so your biggest friend here is stopping cars in their tracks. Or is that your worst enemy? I guess you have to decide.

The graphics themselves are truly fit for HD display. Even with a view from the top, the artwork is carefully laid out. What really mattered for me in this game is the sound effects. The in-game music wasn’t fantastic, I wished I could play my own music. But the sound effects for the different types of vehicles, as they go at regular speed or when you speed them up, these really made City Traffic a winner for me.

In the end, there’s tons of similar apps in the App Store, and I’m sure that whichever you’ll choose, you won’t be disappointed, but it’s important to say that this type of game is a must-try nevertheless, and if diversity is what you’re after, City Traffic can offer that.

Have this iPhone App already ?
What do you think of City Traffic HD ? Scroll down for our comment section and let us know!