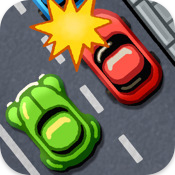 It’s Rush Hour On The iPhone

With so many Santa apps being released now in the AppStore it's been a true delight to see that amongst the Top Free Apps is not actually a singing Santa, or a dancing Santa, or worse any type of farting Santa. Traffic Rush is actually a very entertaining game that takes after Air Traffic Controller, only your a policeman standing in the middle of the street directing traffic.

For some reason the traffic lights are not working, so it's up to you to tell each car when to cross the intersection and when to stop. The good thing is you don't have to follow the normal, real-life traffic rules. In fact, the only rule you need to know is that cars should not be crashing. Other than that, play God!

There are a few controls you need to know. You can tell a car to stop by tapping on it once, tell it to continue on the same path, by tapping it again, or make it speed up by swiping in the car's direction. Just make sure it's crossing the intersection safely. The game will start off easy: just a few cars passing through your soon to be crowded intersection. Simply watch out for traffic and get the cars through safely. The vehicles themselves move at relatively low speeds on their own, with the exception of bikes, which are faster. Speaking of which, you'll be dealing with cars, semi-trucks and motorcycles. Not much variety indeed.

To get things moving along, start swiping every vehicle and watch them swoop by at higher speeds. Eventually, the game will become a tap and swipe game, where you'll be looking to swip faster and more effectively to clear cars before the intersection gets too crowded.

When you tap on a car, it will stop at that point and wait for you to tap it again to make it continue on its path. It's important to know that the drivers are well educated in this game, and they will stop and form a line behind the car that's stopped. As the game gets tougher, you have to deal with this kind of pileups on one side or another of the intersection. But be careful! Stop a car for too long and the driver will take matter into his own hands and drive away.

Not That Many Options To Go With It

The game allows you no mistakes. Crash one car into another and you're done as a traffic policeman. Graphics and sounds are cartoonish and basic, but each type of car benefits from its own customized sound effects, including tires screetching and horn honking. There aren't actually that many extra options to go with an otherwise good release. You can check some funny stats, including personal bests, how many cars you've sped up, how many cars you've saved or how long you've survived the life of a traffic policemen.

There are a few things this game doesn't take into account, which, in my opinion, would definitely make it more interesting. For once, cars, trucks and bikes all move straight. They won't go left or right in the intersection, so that makes it really easy to predict where it will be going. Perhaps adding the element of signaling left or right will make the game that much more entertaining. Second, pedestrians. The intersection features crosswalks and sidewalks, but the game seems empty (and really unrealistic) without pedestrians. Bearing these two options in mind, the game will certainly gain in difficulty, but we, as gamers, enjoy a good challenge, right?

Traffic Rush is sweet and simple, and perhaps that's what the developers really wanted to accomplish. I would say the game is worth the buck and, now for the Holiday period, it's free to grab from the AppStore.

Have this iPhone App already ?
What do you think of Traffic Rush ? Scroll down for our comment section and let us know!.

One Bite to “It’s Rush Hour On The iPhone”