Home » Strimko Is Part Of The New Wave In Puzzle Gaming 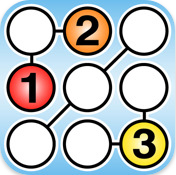 Strimko Is Part Of The New Wave In Puzzle Gaming 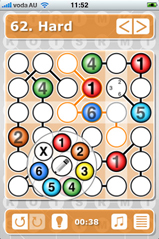 Ok, I must admit this one was a toughie. I'm not taking pride in a Einstein-like brain, but do expect a challenge from Strimko, the number puzzle game from Grabarchuk Puzzles. I was never a math-whiz, but I do generally well on puzzle games, even though they are not my favorite gaming genre.

Strimko is a number puzzle game that introduces a whole new twist for the classic Latin Squares number concept (think the all-popular Sudoku). The object with Strimko is to fully fill the board with the missing numbers observing a few rules. First off, note that the numbers are not on a linear grid, but rather the numbers are placed on "streams," their spots united through a line. You still have to watch out for rows and columns so that they all contain unique numbers across, but with Strimko, the third rule is to maintain that uniqueness on streams as well. So follow this simple rule: each row, column and stream must contain unique numbers.

You're going to see numbers 1 to 4 on a 4x4 grid, and 1 through 7 on a 7x7. Sure enough, there are a few
levels to it, with the first few being a no-brainer. But as you progress, the game gets tougher and it provides a great amount of challenge to begin with.

Strimko has four difficulty levels ranging from Easy to Master, your puzzles are all timed (which does give you bragging rights over your achievements). Once you've mastered the Easy level, jump on to the next puzzles in the category. Don't worry, there will be a while until you've solved all 120 puzzles. And with the dedication the developer has put into this release, I'm sure many more are on the way.

If you're ever stuck and looking for a solution there are various hints and you even have the ability to see the full solution. Each puzzle has one unique solution, all are hand-crafted, quote unquote, by humans for humans, and this does prove to be a huge advantage. There are a number of other puzzles out there, but sadly most are generated by a computer greatly decreasing value and replay value. I'm glad this is not the case with Strimko, as, even though I must admit I am a bit underprepared for it, it is a game I will be keeping on my iPhone.

What the game is missing is a viral element to it. Sharing scores with friends, posting to the online, and so on, I believe would be highly useful for hardcore players and beginners as well.

Peter Grabarchuk - The Man With The (Puzzle) Plan

For those that have never played the game, note that there is an online version to it, from the same developer as the iPhone's game, and it was to my surprise to find out that the person doing these puzzles was actually really dedicated to creating these amazing art works, all original, all hand-crafted. Peter Grabarchuk is the guy behind Peterpuzzle.com and the creator of countless puzzles and puzzle games published at various dedicated websites.

We should note that while Peter Grabarchuk created Strimko, Quokka Studios is behind releasing it into the AppStore. Strimko is selling for $0.99, being currently at 50% off for the holiday period. If you're a hard-core puzzlers, this one's a keeper, so what are you waiting for?

Have this iPhone App already ?
What do you think of Strimko ? Scroll down for our comment section and let us know!.