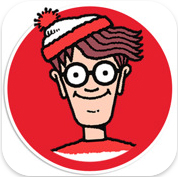 Come Out, Come Out, Wherever You Are!

If the name Waldo (otherwise long for Wally) doesn't resonate with you then all is not lost. Waldo is one of my happy memories from childhood, both the comic books and my various PC adventures have led me to find the elusive man in red, white and blue. In short, Where's Waldo is the iPhone's variation of the theme, and your sole task is to find him and draw him out of hiding from amidst the various animated little characters.

More Challenging On The iPhone

Finding Waldo is basically a dynamic hiddne-object game experience, perhaps the best known title of its kind. Granted, you will get often frustrated, always on the edge of giving up and just smashing that iPhone against the wall. Why, you ask? Well, if you thought that Waldo was hard to find on your comic books or on a nice wide PC screen, then things get even harder on your iPhone, as you can only see a portion of each page at a time.

With Where's Waldo, you have to drag the screen around the screen, and try to spot the red, white and
blue man amidst the other tiny figurines. Apart from finding Waldo, you also need to spot his friends Wenda, Woof and Wizard Whitebeard, on different magical maps throughout the kingdom. The game will also set you on different quests for various objects. There are 12 worlds to explore each with its magical theme.

A Touch Of Interactivity

You're scored on how fast you find objects on the map, so there is a timer to keep track of your score. Upon finding an object, you gain some of the lost time back. You get a helping hand or two from some of the characters and they help your quest, but for the most part you're on you're own.

I think the developers did a good job with bringing the Waldo experience in a truly interactive way to the iPhone. Besides from being able to ask for help and get tips, there's also a good amount of other bits of interactivity in stored for you. Waldo's arch-enemy, Odlaw, will constantly try to throw you off your quest by making your screen shake, flipping it upside down, throwing spaltters of colorful paint at you or freezing the screen. Unfortunately, the only way to avoid this is to find him fast, or tap him the moment you see him getting ready to do some damage.

More Than A Book Ported To The iPhone

While there's no shortage of hidden object games in the AppStore, Waldo, the prominent title, was missing. Well, no more! It's here and it's brought all the toughness of the game genre, since Waldo (and the other various objects) just look like part of the picture, instead of sticking out carelessly. Each map tells a story of its own, every image is highly detailed, and, not to mention, taken right from the book. Well, apart from the character animations, obviously.

Where's Waldo is not an experience everyone can enjoy, certainly not for those with short attention spans, but for those like me that were fans of the books, comics and Wally in general, you're going to enjoy it. To experience the true Waldo experience right on your device will set you back $2.99, a tag price I'm willing to live with to enjoy a great title.

Have this iPhone App already ?
What do you think of Where's Waldo The Fantastic Journey ? Scroll down for our comment section and let us know!.