With the release of the latest movie in the Terminator series came Gameloft and launched the game version for the iPhone and iPod Touch. And a great job they did, as Terminator Salvation Army for the iPhone has kept us wanting more at the end, topping what we've seen so far in graphics and sound effects for third-person shooters in the App Store.

In Terminator Salvation Army you take control of human resistance leader John Connor and even a Terminator named Marcus Wright in an attempt to save humanity from Skynet and its army of Terminators. Although the game does a great job at not giving away the movie plot, you'll still get to kick some T-1 and T-700 butt.

The game plot seems weak at times, as it appears that the road from apocalyptic 2018 Los Angeles to San Francisco on foot, truck and on the back of a Terminator-style motorcycle follows a pretty linear path. But the plot is not where the game excels. The controls for Terminator Salvation Army are simply awesome. With everything rendered in full 3D, and this has an effect not only on visuals, which are by the way stunningly impressive, but also on the game play. The game will throw Terminators at you from each and every direction, so be prepared to move, look and shoot, all at the same time. You move around with a virtual directional stick in the lower-left corner of the screen, shoot by tapping the fire-button in the opposite lower corner, and looking around, well, needless to say it's pretty amazing. Drag the screen around, use the directional wheel neatly placed around the fire button, or simply move your iPhone around, since Gameloft made good use of the incorporated accelerometer to give you the exact control you're more comfortable with. Change weapons in the upper-corner by tapping the current weapon. And you're off to killing machines.

As related to game difficulty, we were a little disappointed, as Gameloft built-in some pretty slow enemy Terminators, while giving you the upper hand with guidance and tips like where you have to go and where you're shot from. If you don't see a health meter, don't worry about dying, because you have regenerative health and infinite continues from checkpoints. During load times, which are remarkably quick considering the full 3D render that needs to be processed, you're shown specs on the various T-models you'll be going up against in the game, packed with unique weak spots for each of them. The game packs only 8 missions giving you about 2-3 hours of game play, albeit they may very well be the greatest 2-3 hours of your day.

Another interesting and innovative development for the iPhone version of the game is the awesome cover system that responds automatically if you are close to an object that can provide cover. John will crouch automatically behind it, and you can continue to peek around, aim while in cover and begin firing as soon as you start moving. Your weapons locker is packed with an impressive arsenal. You get to choose between rifles, shotguns, grenade launchers and even a surge cannon.

If gaming on the iPhone is your thing then Terminator Salvation Army delivers great game play, stunning graphics packed with fun and excitement you can enjoy even if you're not a fan of the Terminator series. The game is available at the price of $4.99 in the App Store and you also get to play the lite version for free, which offers fewer levels and fewer weapons. 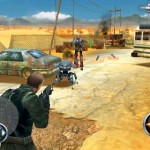 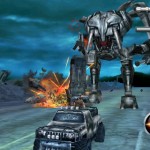 Leave a Reply to Friv 2 Friv 4