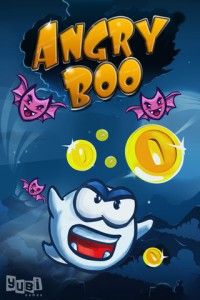 Meet Boo. He's one cute ghost with a destination to reach. But he can only travel by jumping from one spider web to another. And as if that wasn't hard enough, he also has to be careful not to get caught by the mean bats that he meets along the way. Can you help Boo get to the place he wants to reach? If so, you can find Angry Boo in the AppStore, and try to put a smile on his face.

How can you help Angry Boo

Angry Boo is an arcade game, where you have to control a ghost by shooting him from one spider web to another. The goal is to safely reach your destination, while collecting as many coins as you can and protecting Boo from the evil bats waiting to catch him. With every level you clear, you get Boo closer to his destination, but it also gets harder to continue the journey. However, there's no need to worry. Every level has a number of checkpoints, and once you reach one, you don't have to start the level all over again, when Boo falls from his web. You just start at the checkpoint that you last reached.

Controlling Boo is easy to do, but getting right is a bit harder than it looks. You launch Boo just like you would in Angry Birds (Angry Boo Angry Birds, wink, wink). Touch and drag Boo on the screen and pay close attention to the path it forms. Make sure you always land on a spider web and try to collect as many coins as you can.

Angry Boo has an extremely intuitive gameplay, so even if you choose to skip the tutorial, you won't have any problem figuring out how to control Boo. There are 4 game zones, with 28 levels, but if you want to play all of them, you'll have to pay to unlock them. However, even if you choose to only play the free levels, the game is still very challenging and fun. Discovering the right moves and learning when to repeat them to safely get Boo from one web to another might seem hard at first. But once you get used to it, you'll start challenging yourself even more, by trying to collect as many coins in a row, so that you can receive bonus points.

Start playing on the iPad, finish it on the iPhone

And the great thing about Angry Boo is that it comes with iCloud integration. So, even if you start the game on one device, you can pick it up where you left off, even if you're playing on another device. How cool is that? Plus, Angry Boo is not only fun to play, but also nice to look at. It's got great graphics, Boo is a really adorable character, and the spooky background tune will make you feel as if it's Halloween all over again. The only annoying thing about it is that, before starting the level, there are a lot of ads popping out on the screen. But, at least, they aren't appearing while you play, so it's not that much of a problem.

This being said, there's only one thing left to do. Grab Angry Boo and challenge your friends to see who can collect the most coins and who can get Boo to its destination the fastest.

Have this iPhone App already ?
What do you think of Angry Boo ? Scroll down for our comment section and let us know!