Reminisce about paper-game classics with Dots 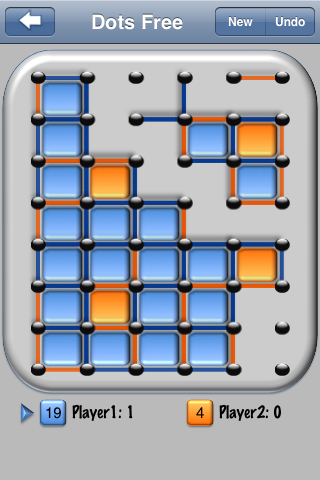 This iPhone game from the developers at Optime Software is bound to bring back childhood memories of grammar school, when we were wasting time and paper on one of the best games we've ever played back in the times. With Dots, forget about wasting paper, and download for free this sweet classic and play against the computer while reminiscing about the good old days when time flew by and fun was guaranteed.

For those of you who don't know the game and haven't played it before, the learning curve is really low. You basically have to connect dots by placing a line between any two dots, while alternating turns with your opponent. The goal is connect four lines as to create a closed circuit between them, aka a box. You win by completing more boxes than your opponent.

The game requires some strategy, as you must make sure your opponent won't have the option to complete a box you've worked on. The player whose line completes the box gets the point, so be careful where you place your next line. The app will keep track of the score for you, and will even color code each box to the color of the player that closed the circuit around it.

The game also has some important features and options you can customize according to your desired game play. For example, typically, closing a box gives you the next move as well, but if you want to be extra-fair, then you can turn this option off in the options screen. You can choose to play against the computer or against a friend on the same iPhone or iPod Touch. One of the weird options we've seen is choosing to be a simple spectator, as you watch a computer vs. computer game. You can also choose the difficulty level in the vs. computer game, choose which player starts, or alternate turns.

So put away your pencil and paper and challenge a friend to that all-time classic Dots right on your iPhone. Dots has got to be one of the greatest childhood time-wasters ever invented, and now it's available for free to download from the AppStore.

Have this iPhone App already ?
What do you think of Dots ? Scroll down for our comment section and let us know!