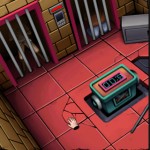 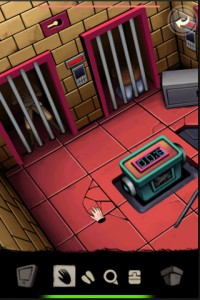 This is the tenth room that you’ll find yourself in - entitled "Countdown." If you want to take a look at our walkthrough of the Ninth Room you can find it via the link. So fire up your Escape The Room 2 game and let’s go!

Room 10 is Countdown and this time you will have a choice to make, each one leading to a different outcome. It's not half as complicated as the previous level, and, depending on what you choose, you can be out of there in a couple of minutes or you'll have to struggle with mathematical operations that might prevent you from getting out of there alive, before the bomb explodes.

The first thing you will see in Room 10 is a bomb. As if it wasn't enough that you have to hurry up to prevent the bomb in your chest from exploding, now you have another bomb to worry about. But you're not the only one trapped in this room. There are also four people locked in four different cages. And guess who they are.

Remember the previous level, when you discovered all those pictures that were hidden on the memory cards? Well, each one of these people appeared in one of the photos and, as you found out by looking at the pictures, each one of them did something to harm you in the past. For all you know, they might be the reason why you're here.

But before deciding if you can forgive, forget and release them, there are a couple of things you have to do. First of all, grab the pincers on the floor, next to the bomb and jigsaw 13 from the grey cabinet. Use the pincers to crack a hole in the West wall and get a golden key, then crack another hole in the floor, near the bomb, and get a steel heart. And there's still one more thing that you have to do with the pincers. 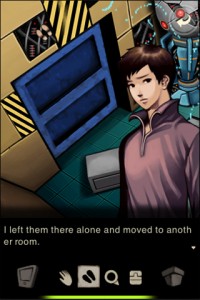 Input the code on the device next to the door on the South Wall. Instead of opening it with the code, a keyhole will be revealed. Use the Strange key to open the door and...now it's time to make a decision. Will you be the better person and risk your life to save the ones who have hurt you and are now behind bars? Or will you get out of the room and let them rot there? It's all up to you.

Case Scenario 1: Save yourself

If you decide to leave the prisoners behind and exit through the door you have just opened, the door will lock behind you and you will hear the bomb exploding in the other room. Before you know it, you will be back in the room, looking at the damage made by the explosion. All you have to do is take the iron pipe on the floor and use it to crack a hole at the bottom of the South-East wall. An exit will be revealed and once you cross to the other side, you will escape Room 10 and unlock Room 12. 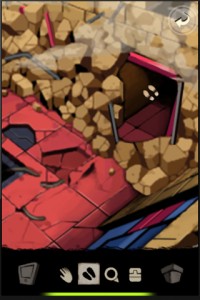 Case Scenario 2: Be the hero

If you decide to help the prisoners escape before exiting the room, you should know it won't be an easy task. As you can see, every cage is connected to a code. If you touch one of the devices, where you have to input the code to free the prisoners, you will see a number and eight buttons with other numbers written on them. Don’t bother looking for a code, there isn’t one.

Instead, look closely at each lock and you’ll see it’s actually a math puzzle. There are two rows of white and red dots at the top of the lock. Touching any of the numbers on the number pad will make a white dot disappear and that number be added to the screen. Now you have the original number and your number. Touching another number on the pad will add it to your number and have another white dot disappear. The key is to obtain the result that the screen shows you (the white number that never changes) by adding as many numbers on the keypad as there are white dots. You have to do this as many times as there are red dots. 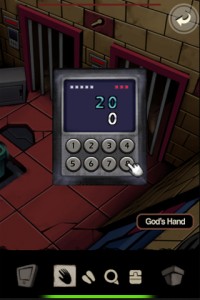 The lock on the Southeast is the easiest. You can have the number 20 as the result you need to obtain, five white dots and two red ones. This means you need to add five numbers on your number pad to get the number 20. For example, adding 1+2+3+7+7 gives you 20. Then the number 20 changes and the level of difficulty along with it. You now get the number 35. That can be 9+9+9+3+5 - five numbers, their sum is 35. You’ve just released your prisoner. These numbers are just an example of course.

Solve each of the locks on the three caged doors as many times as you need to, before the bomb in the room and the bomb in your chest goes boom.

Only after you input the right numbers in all the devices near the cages, will the prisoners be free. All that's left for you to do now is exit. Once you step out of the room, you will leave Room 10 and unlock Room 11.

Being the hero kinda sucks right?!

Leave a Reply to Mek LY