Home » Falling Gems is a real gem for the iPhone

Falling Gems is a real gem for the iPhone 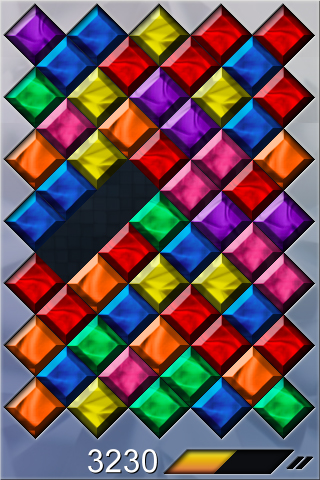 It's time for yet another extremely addictive game for you to try out on you iPhone or iPod Touch. You are challenged to lineup three same-color gems from a multitude of gems you have on your board. Doing so, will get those gems out of the way, and make room for new ones. The catch is that the game idea behind it is to take gravity into account, as the new gems will not take the old ones' places. They will instead fall from the top, pushing those underneath to fall into place.

The game has a moderate learning curve, as you have to swap adjacent gems to make sets of three or more of the same color touch and take them out. You don't neet a lot of strategy to have in mind, but you should however be paying attention to what happens to adjacent gems when you take a row of same-colored gems out. You're allowed to form any shape you want, including a straight line, L-shaped, U-shaped, or any other shape as long as the pieces are completely touching each other on one full side.

If the swapping of two pieces won't result in a take-out, the two pieces move back into their original places, which I guess makes the game more difficult, but all the more addictive. We haven't found ourselves in a jam yet, so I guess the game has a solution for every move you make. It is however a race against time, so do pay attention to that yellow bar display on your right side down of the iPhone's screen, because time is merciless. Don't worry though, as taking out gems earns you precious seconds.

One of the benefits of Falling Gems, and something that really makes it a gem for the iPhone and iPod Touch, is its insane simplicity. Just start the game and you're off straight to the gems, no special effects, no loading time, no stories to read. And if you exit the game due to whatever reason, the game is automatically saved and is accessible the next time you start it.

All the game is missing is some interesting power-ups to both help you out of a jam and make the game that more addictive. All in all, what we've seen with Falling Gems is a concept of simplicity put into effect, making it a shiny piece of addictive gem for your iPhone. The game is free to download from the AppStore, and we're looking forward to more similar games from the developers at Rocha Software.

Have this iPhone App already ?
What do you think of Falling Gems ? Scroll down for our comment section and let us know!