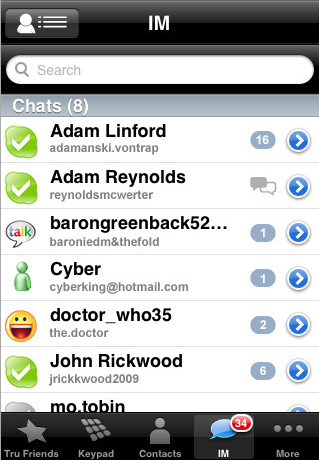 Skype now has a competitor for the mobile market with Truphone releasing their own iphone app, allowing users to save big on international calls. With its new version hitting the Appstore, it definitely called for a review, especially with its enticing offer for better call quality, a unifying IM and several interface improvements.

Like Skype, it gives you free voice calls worldwide to other Truphone users, instant messaging, and great rates for calls made to landlines and other mobile phones. Like Skype however, calls are only allowed over WiFi, as iphone VoIP apps aren't allowed to use 3G. So, if you and your partner are both in range of a hotspot, jab all you want, it's all completely free. Even calls to landlines and other mobile phones come at pretty low rates. Calls to the US come at 5.1 cents a minute, less if you sign up for one of their monthly plans. It seems like the app works well even when out of WiFi range, by routing the call over the internet using the user's local GSM network.

One of the main advantages over the competition comes however not only from the improved VoIP call quality, but also from its unified IM possibilities. Truphone gathers the most used instant messengers (AIM, Gtalk, Yahoo Messenger, MSN and even Skype) under one screen to rule them all. Other social networking services are also placed at your disposal on another of the iphone's screen.

With its new slick interface, almost blending with the native iPhone interface, the user experience has highly improved over the previous version. Contacts are imported automatically, so you can make a call from Truphone just as if you were doing it from the iPhone Contacts. Your favorite contacts are not imported, however. If you're in a VoIP call with Truphone and you get rung on the iPhone, your Truphone call is dropped automatically.

All in all, one more thing to mention is that Truphone makes iPod Touch users just as happy, as the app can be downloaded for free from the Appstore and ran on both devices. If iPoders were outcast because the iPod Touch could do pretty much everything the Apple Iphone could, with the exception of making calls, Truphone leveled the score. With Truphone 3.0 you can see the going rate for a call before placing it, access a call history, and those 5 bucks you get when signing up for an account make it more than worthy for a spot on the Top Iphone Apps and a high app review from us at appbite.

Edit: It seems that we had it a little wrong, as one of the Truphone team members pointed it out for us (thanks by the way), you only get 50c call credit at sign up, and not 5 bucks, which would indeed be nice :) Check out Heath's comment at the bottom of the post for his original remarks.

Have this iPhone App already ?
What do you think of Truphone ? Scroll down for our comment section and let us know!

Leave a Reply to JThompson