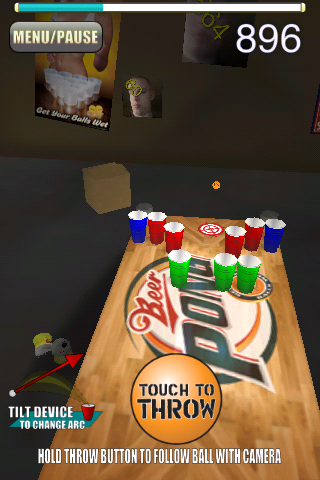 Yes, finally, it's time we forget about campus rules, drinking age limit, and enjoy a classic game of beer pong. This iPhone game lets you play solo, in the arcade mode, or challenge a friend to a 6 or 10 cup table. There is no beer to be drunk of course, but the fun is guaranteed.

Beer Pong Challenge lets you play the all-time college favorite game you enjoyed so much as a frat member, in your own virtual garage you can decorate with wining photos of yourself as you stack up those empty beer cups. The controls are pretty self-explanatory, both simple and intuitive. The red bulls-eye moves back and forth across the table, while the arrow in your left-hand side of the screen decides how high you throw. Tilt your iPhone left or right to move the target and up or down to aim higher or lower. The game needs precise timing and positioning to get the ping-pong ball in the beer-cup. Simply tap the button to throw, or hold it down to follow the flight of the ball, see how your throw went and decide on future trajectories.

The aim of the game, of course, is to get all the cups on the other side of the table, off the table. Be careful though, for as you progress and remove cups from the table, your aim and precision decreases, as presumably, you get dizzy from the beer you've just drunk. The game however gets more interesting and captivating, so a big plus from us. Starting from version 1.0.5 the graphics are less rough and the movements are more realistic.

With the classic beer pong being considered the crown jewel of all underage drinking games, it would be no miracle to see Beer Pong Challenge rising to the top in the App Store, especially when the app is free to download for your iPhone and iPod Touch. While in real life, the game is a test of endurance and only those with a tough stomach and a beer belly can hope to be all-time champions, with Beer Pong Challenge for the iPhone, anyone can be declared Beer Ponger of the day.

With classic drinking games coming to your iPhone and iPod Touch, we'd like to see more and more of them. One of the team's favorites here we were discussing was Quarters when we came across such a game from Publisher X, called Beer Bounce. The game is also up for grabs in the AppStore, and a review is due shortly.

Have this iPhone App already ?
What do you think of Beer Pong Challenge ? Scroll down for our comment section and let us know!