A regular cat and mouse game 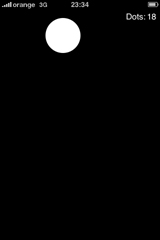 This iPhone game from the team over at Micromelon is designed to test your eye-to-hand coordination in a simple and fun way. Chase the big white dot on the wide black screen of your iPhone or iPod Touch and touch it before it disappears and switches locations.

You get points for your response time, meaning the sooner you tap that dot before it jumps to its next location, the more points you're awarded. The game has three levels of difficulty - Easy, Medium and Hard. With each of the levels, the size of the dot decreases and the speed at which it jumps from location to location increases dramatically. At the Hard level, you're well on your way to tapping the screen nervously chasing the ever-smaller white dot.

Chase the Dot is a pretty interesting game providing enough entertainment for a couple of minutes of waiting in line, but after a while the game can get pretty boring. Its entertainment value goes as far as its price level reaches - the game is free to download in the App Store. I understand the need of the developers to keep it simple and to the point, but is it a game that you'd want to play again and again? I think not. The guys might have fallen in that double-trap of simplicity. Simple yet effective vs. Simplistic to the point of boredom, and sadly, have gone pass that point.

Have this iPhone App already ?
What do you think of Chase Dot ? Scroll down for our comment section and let us know!