Home » Shooting Trolls Is Just As Fun As Shooting Pigs 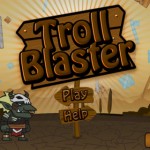 Shooting Trolls Is Just As Fun As Shooting Pigs

If you were one of the people that thought that slingshooting birds and pigs was not what a mobile phone was for, then Troll Blaster won’t sit right up your alley either. But even if you were, you undoubtedly changed your mind after you first saw Angry Birds. And I say that because the game seemed silly to me at first as well. It goes the same for Troll Blaster, a physics game in which you need to use whatever weapons you’re given to take out every troll on the map.

How to play Troll Blaster

If you’ve played Angry Birds, you’re already a master at shooting things at structures. Each level in Troll Blaster will give you a set of weapons, a fixed ammunition for each weapon and trolls and structures to destroy using weapons, intuition and, of course, some physics.

From the get-go, you’ll feel right at home. But what sets Troll Blaster apart from the rest of the competition, Angry Birds included, is that you can select the order in which to use your weapons. Shortly put, with each shot, you’ll get the option to select your weapon, provided you have ammo left for it.

There are four types of weapons (that I’ve discovered so far) in Troll Blaster. You have a crossbow, two cannons (one black, one red) and what appears to be a snipper gun.. As you can expect, the crossbow doesn’t do much damage, but has a better accuracy than the cannons. The difference between the two cannons is that the red one does more damage and is also effective against brick constructions, where the black one is only able to move one such construction. The snipper gun is still inactive, although I’ve played through about 10 out of the 64 available levels.

You also have different types of trolls, and each troll will have a certain amount of life in it, meaning that it can take more hits to take it out. However, so far, direct hits will always kill a troll, no matter the weapon

As you can expect though, you’re not going to get too many of those direct lines of sight to apply your direct shot. You can however clear a path for yourself, perhaps taking some trolls down with the constructions as well. The red cannon is clearly the most effective weapon to clearing those blocks. Aim low to take down the whole building, from the bottom up. Aim high to take out key components so that the building collapses. You know the drill.

A worthy competitor to Angry Birds?

As with other attempts to apply an uppercut to Angry Birds, the structures and animations are more rigid than the smooth effects the genre-defining game provides. The trolls will fall down like chess pieces and the structures might slide right on top of the troll without doing any harm to it. In short, in terms of graphics, Troll Blaster doesn’t live up to being Appollo Creed’s Rocky Balboa, if we’re to stick to boxing analogies.

For me, Angry Birds got old. It was fun for quite some time. Yes, I enjoyed slaughtering pigs. Yes, I rescued those damn bird eggs. And yes I’m a fan. But after a while, after 40-50 levels of play, you inevitably go “meh” and sigh. I don’t think though that Troll Blaster can replace what is otherwise an amazing game that has swept the entire world, literally the entire world, and sent it to a frenzy. I don’t think that’s what it aims to do though, but inevitable, Troll Blaster entered a territory that’s still run by birds and pigs.

I don’t know what’s with this type of games, but they’re incredibly addictive, which is not necessarily a good thing when you have actual work to get done during the day and not enough time in the night to sleep either. And Troll Blaster is no exception. I’ve played those 10 levels in a non-stop session, and didn’t even realize how time flew right out the window.

Have this iPhone App already ?
What do you think of Troll Blaster ? Scroll down for our comment section and let us know!