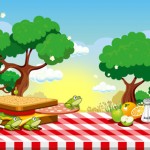 Think Angry Birds except slightly more confusing as you’re shooting a frog from a leaf so your trajectories aren’t as easy to fathom (although the line guide helps).

I’m not sure about you, but when I play Angry Birds I find myself getting, well, angry - mainly at my sheer lack of skill and/or coming so close to hitting those pesky pigs but not quite getting the hit right. I suppose that’s what makes games like these so addictive and what keeps people coming back for more.

When faced with yet another Angry Birds type app I hoped for something a little different to make give me some sort of a different experience. Well, the little differences in Catch the Fly resulted in the app being more annoying and just served to make me angrier. Let me explain.
The sounds on this app are set to the "annoy fully" level - one sound makes you think a baby is crying badly at you and the other sound effects sound like someone has recorded them with minimal effort and maximum annoyance. I suggest you play with the sound off.
As mention above, working out the trajectory for your frog friends is made easier with the help of a guide-line, however, I found it a little confusing pulling back the leaf, but maybe that’s just me!

Conclusion
If you like and have completed Angry Birds and are looking for something that you can replace it with until they bring out the next version then the Catch the Fly app might be for you - it offers very similar game-play and if you turn the sound off I can imagine someone enjoying the different scenery even though it’s a very similar challenge.

Have this iPhone App already ?
What do you think of Catch the Fly ? Scroll down for our comment section and let us know!