Home » My Virtual Boyfriend Is All Play 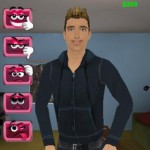 My Virtual Boyfriend Is All Play 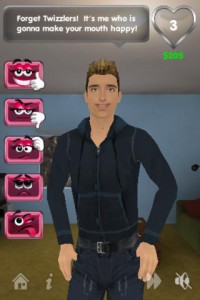 Tired of looking for Prince Charming? Well, stop looking and start making your own. Whether you want him to be Mr Nice Guy or a bad boy, a model or a geek, you don't have to kiss any frogs to make him come to life. All you have to do is download My Virtual Boyfriend app and you can start calling him your virtual boyfriend.

While the app is not a match-making service, the first thing that your virtual boyfriend wants is to know more about yourself. How you look, the things you like, your personal characteristics. Then, you have to say how you would like him to be - brown or blond haired, nice or bad guy, smart, wealthy or fun. And he's not asking just to make small talk. After ranking all these characteristics on a scale from 1 to 5, your virtual boyfriend will look and act according to your wishes.

But be careful, because that doesn't make him your puppet on a string. He's got a personality of his own. You have a number of activities and actions you can do with him and his reaction to your proposals depend on this personality and his natural born male characteristics. It's not the same if you slap him or take him out to dinner, accuse him of cheating or watch the game with him. Also, you can talk to him, caress or tickle him.

Your goal? To make him fall in love with you, which means reaching the 20th level of the game. How fast you get there depends on how much he likes the way you respond to the things he tells you or how much you spoil him. If you're intuitive, tell him yes and no when you know he's expecting you to do so, watch the game instead of taking him shopping and you will reach level 20 in under an hour. But if you really want to be a part of the game and not just burn levels for a fast win, you can do exactly how you feel and he will grow to love you for who you really are.

Virtual is just not real life

However, game wise, your virtual boyfriend might not be as fun as you've imagined him to be. Although with every level passed you can do more activities with him, that's about it. If you play smart, you can quickly reach the 20th level and there’s not much else you can do. I would have liked it more if this virtual boyfriend was more of a challenge.

When it comes to talking, you can only agree or disagree, show him that you are confused, sorry or upset. No surprise he's listening, when you are only allowed to say five things. Also, no matter the activity you choose, you get a suggestive image for the activity, an acknowledgement that you've done it and that's it. I wasn't expecting fireworks or special effects, but when I saw the activities and the speaking function, I thought that it would be like Sims or better, since I am not the puppet master now, but an involved character.

All in all, don't expect virtual boyfriend to be a guideline for your current or future relationship. Just take it as it is. A fun game, where you can choose from hundreds of guys whose only wish is for you to love them. I don't know how much of a boyfriend they can be, but at least you can laugh with, or better yet, at them.

Have this iPhone App already ?
What do you think of My Virtual Boyfriend ? Scroll down for our comment section and let us know!

One Bite to “My Virtual Boyfriend Is All Play”