Home » Recorder Pro, is it all downhill from here?

Recorder Pro, is it all downhill from here? 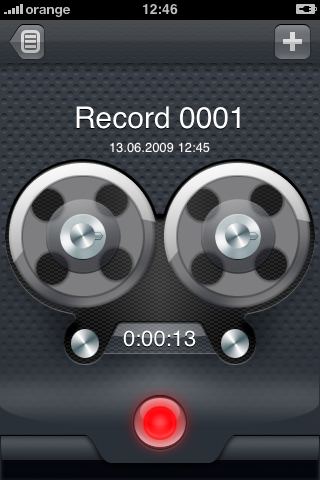 We've had this iPhone app in the queue for quite some time now, when Recorder Pro was available for free after changing its name from iDicto. We must apologize to the development team over at DAVA for not posting the review earlier, perhaps before the new OS 3.0 was launched, which includes the Voice Memo native app.

Reviewing Voice Memo from Apple is not what we're going to be doing, but needless to say that all the nice functionality we get from Recorder Pro (previously iDicto) is available with Voice Memo. On to Recorder Pro, the app does exactly what it was intended to do, record voice memos, events, stories, what have you, of any length, depending on your free storage capacity. Starting and stopping a recording is simple, and is done simply by tapping the record or pause button. Each recording is assigned a date, time and length, and, additionally, you can choose to asig it a name, associate it with an icon to group several recordings together under the same icon, and even a priority level.

Feel free to pause and restart recording whenever, or pause and rewind during playback. Perhaps one important feature we saw missing from the Voice Memo app was the Sync function that allows you to copy the voice recordings from your iPhone to your MAC or PC via WiFi as easy as taping a button. You're not restricted to file size either, which is another big plus for Recorder Pro.

But the big question remains. Is it all down hill from here for Recorder Pro and similar apps now that Voice Memo is provided free of charge right from the box? We don't believe that, because we put our trust in developers and encourage them to create apps that are more interactive, more creative and with more functionality than ever before. For now though, Recorder Pro must evolve into something else, something that users would not only download but also prefer to use instead of the out-of-the-box app. Either that or fade away.

Have this iPhone App already ?
What do you think of Recorder Pro ? Scroll down for our comment section and let us know!

4 Bites to “Recorder Pro, is it all downhill from here?”

Leave a Reply to Dudsona