Home » Shoot’em All With Wingbreaker 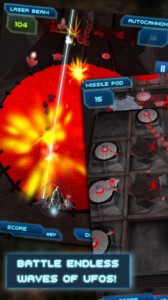 We've played games long before having any iPhone, Playstation or even a computer. From outdoor activities to board games, games have kept us busy for hours, when we were young. And arcade games, of course. I remember having a device that now looks like the PSP's great, great, great grandfather, that had all these classical arcade games on it. Like Tetris, Snake and those shoot'em up type of games, where you had to move some sort of ship from one end of the screen to the other to shoot at other ships or dots on the screen.

Today, I don't even know where my old playing device is. But I'm always happy to see all these games coming to life on iPhones, iPads and iPods. So, I was pretty excited to come across Wingbreaker. Because it's exactly the type of shoot'em all game that I was talking about.

What I appreciated most about Wingbreaker is that it took the original game and made more out of it. Because Wingbreaker is not only an arcade game, but it also has a Mission Mode. Plus, it gives you all these power-ups and incentives that make the game more enjoyable.

The rules are pretty much the same. Your main goal is to shoot everything in sight, while avoiding to crash into all sorts of levitating objects, like other ships, UFOs, asteroids, and so on. You move your ship by tilting the device up and down, right and left. And you can switch from your basic weapon, to others you collect on the way, by tapping on the screen to the left or to the right.

Why you should play Wingbreaker

Now, this is how the games works. But what gives you the incentive to play are all the cool stuff that come with playing Wingbreaker. For example, you get an extra ship you can use in Arcade Mode, every time you achieve all the goals in a level in Career Mode. Also, the more points you earn in Arcade Mode, the more items you unlock to customize your ship. Plus, there are all the power-ups you get while playing the game, that make your ship harder to destroy, and a bigger threat for the enemies. And for every thing you don't have the time or patience to unlock or earn, you can pay in cash or in shares on Facebook and Twitter.

There's still more to discover about Wingbreaker, but the bottom line is that it turns the classic game into a modern and even more exciting challenge. Its graphics look old-school, arcady, trying to mimic my old game player, which I thought was cool. All the additions it brings to the original game makes Wingbreaker worth playing. Especially since now you can enjoy all this coolness for free, for a limited time.

Have this iPhone Game already ?
What do you think of Wingbreaker? Scroll down for our comment section and let us know!