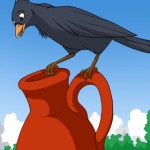 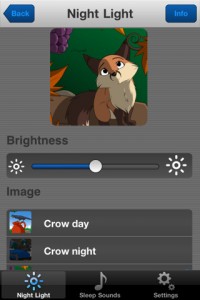 Once again the people at Aesop hit the nail on the head with their app by sticking to the fundamental principle of keeping it simple. The app does exactly what it says it will - provide you with a picture nightlight and a variety of sounds to help sooth the little one off to the land of nod.
See our review of Aesop Period Pace

The app includes a timer functionality so you don't have to worry about turning it off and you can even use the image as a wake up image to put a smile on your little ones face. The user can also control the brightness of the images which is useful to ensure you get the soft and soothing light you want.

With 15 sounds to choose from you have a range of choices from lullabys to the sounds of nature to just simple white noise. I actually found the bird song sound quite soothing.

The ability to choose one of six nightlight images is good, but the developers have shown extra thought by including day and night versions of the "characters" (a crow, fox or wolf) - send your child to sleep with the night images and have them way up to the day ones - another simple idea, but a nice touch.

I only have three concerns, the first of which is that there are only a few images to choose from and I wonder if children will be more demanding and expect more variety. The second is that you will obviously not be able to use your iPhone while you're waiting for the little one to drop off and you will have to turn the phone and notification elements off (i.e., put into airplane mode) as otherwise a call/message notification might inturrupt the dreamy environment you have created. The plus side is you have an excuse for just chilling out without getting interrupted with unwanted calls! The third likely reflects that I have not been exposed to fairy tales for quite a while as while I found the crow and fox images quite cute, the wolf images made me worry that nightmares may be ahead! More cute ducks and other wildlife requested please!

On an ending note, I think this is a pretty good app for those parents who don't want to fork out for a lullaby machine or for those travel times when you can't take the lullaby machine with you and you need something to sooth your mini-traveller. With an app you've also got the added plus that there might always be new sounds and images added in updates.

Have this iPhone App already ?
What do you think of Nightlight + Lullaby songs & Sleep sounds ? Scroll down for our comment section and let us know!

Leave a Reply to Francis