Home » Be The Next Social President With VoteMe

Be The Next Social President With VoteMe 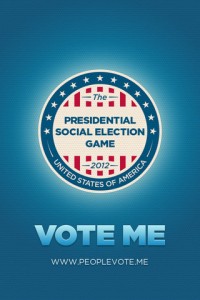 Have you ever wondered how it would be like if you could be the next president? Well, now you can. And you don't even need to go through all the formalities that other former candidates have to. All the power, but also all the responsibilities can be yours if you download VoteMe from the AppStore. What do you say? Do you have the necessary qualities and strength to convince the voters that you are the best choice for presidency?

How does it work

VoteMe is an ingenious app that gives you the opportunity to candidate for Social Presidency, along with other Social Candidates. The concept is fun, but the things you have to do to win popularity are as serious as it gets. Just like a real candidate, you have to put together a capable team to support you, a well done campaign and a good strategy to defeat the competition. And there are already so many candidates fighting for this position, that you better hurry and come up with something really clever if you want to be the next Social President.

Although you don't have to fill in a lot of paperwork, there are some formalities that you have to go through before entering the competition. You must read and agree to an entire document of rules and policies that you have to follow once you start competing. Plus, the only way to enter the election is by signing in with your Facebook account. These things make the app look less fun at first sight, but once you're done with all the formalities, you'll see that your effort wasn't in vain. And, if you come to think about it, these formalities are nothing compared to what you have to go through to enter an actual election.

Create your profile & meet the adversaries

Once you're done with the less fun part, it's time to complete your profile. You can update your campaign status to let the voters see what you are fighting for, and add photos to make them know you better. Also, you can start adding members to your party, by inviting them via Facebook, email or other accounts that you have listed for them under Phone Contacts. For each adjustment that you make to your profile, you get a certain number of points. The more points you get, the more of a threat you'll be to your adversaries. So, besides collecting points by improving your profile, you can also purchase services or campaign items that will instantly increase your points or will give you a point bonus every time you use them.

But running for presidency isn't just about your campaign, strategy and profile. You also have to see what your adversaries are doing. So, when you're done with your profile, it's time to see other candidates' profiles. See what they are fighting for, what's their strategy and who is backing them up. For all you know, you might find someone who shares the same beliefs as you, and help each other. Win popularity by voting other candidates and develop a better strategy by seeing who you're up against. Be the best and win the title that you're longing for.

Find out more about the real candidates

Also, you can use VoteMe to find out more about the real-life candidates of this year's US election. See which one of them is closest to your views and ideals. Vote for your favorite candidate and earn even more points. Of course, your vote won't count at the official election, since the app isn't aiming at promoting a certain candidate or to gather votes. It's just an expression of your preferences, and you can change it at any time.

This being said, VoteMe can make you the next Social President. Of course, it's not the same as being your country’s president, but it will win you some popularity in the Social Media.

Have this iPhone App already ?
What do you think of VoteMe ? Scroll down for our comment section and let us know!